The Edge of Extinction

An evening with 4 parts from cult series Studio Kromeriz


Studio Kroměříž brings together theatre and television genres in an original way. A unique phenomenon, the show only entered public television at the onset of the wild 1990s.

At that time, the young director Petr Lébl, who still had not made a name for himself, was provided
with unprecedented space to carry out, without any program strategy, a seemingly purposeless play with an audience member and, as one
audience member put it, “entertain both the audience and the actors”.

In a few part of this series we follow the lives of several figures of a fictional discussion program. In the beginning Studio Kroměříž copied the television form very realistically and then in later parts began to openly and freely work with other processes until it bordered on parody and trashy entertainment.

Studio Kroměříž is above all a witty and loyal study of a specific type of person – his typical speech and thinking.

One of the main themes of Studio Kroměříž is the pointless struggle of several intellectuals, whom have been “restituted spiritual values”, as well as the rise and fall of television itself as a media that later utterly failed. 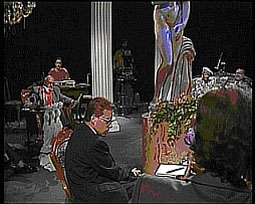