In the three-part presentation the curator, Łukasz Ronduda, will present the three most important groups of the Polish avant-garde of the 1970s’, focused on confronting artstic ideas with the film medium.

The works of the Film Form Workshop, a group of professionally educated directors and movie-camera operators from The National University of Film in Lodz, will be presented in the first part, Analitic strategies. The group consists of people who decided to reject the corrupted Polish cinema of those days and enter the field of modern art, with focus on conceptual and minimalistic experiments. Films by Józef Robakowski, Kazimierz Bendkowski and Ryszard Waśko will be shown during the presentation.

In the second section, Political film - Soc Art, we will be acquainted with the works of Paweł Kwiek and of the artistic duo KwieKulik, located between participation, political activity and cinema. These artists were a group of revisionists who used to frankly criticize the real socialism in Poland of the 70s. The artists formed their criticism from a subversive position.

The third section, Consumption, deals with artists who treated their works as an effort to reach a critical or affirmative connection between pop-culture and the quasi-consumptionist culture of the 1970s Poland (Natalia LL, Zdzisław Sosnowski, Janusz Haka and Zygmunt Rytka). 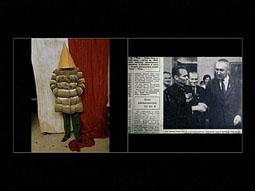