The Least Resistance
A bear and a rat (played by the artists) are out to make a lot of money with art. During a tour of investigation, they find a corpse in a gallery and, hoping it will prove to be a means of access to the worlds of culture, action and finance, they take it along with them.

However the desired effect is not forthcoming and they become involved in questions and observations on the subject of art and crime. The rat tries to solve the case himself; to him there is no distinction between artist and detective.

After a narrow escape from a murder attempt, the two animals join forces once again and, now sadder and wiser, they resolve to improve - something that appears to be far from easy. But at the depths of despair they discover a system of order in the chaos of the world, which encourages them to venture into the area of philosophy. From here, they proceed into undreamed-of insights and flights of fancy.

The Right Way
A rat and a bear go hiking in the open, as-it-were unspoiled countryside, at the mercy of the elements and all kinds of miracles - and, above all, at the mercy of themselves. With pure hearts and loads of goodwill, they try to find reasons for all they see and experience. Spontaneously they sometimes find themselves getting closer than expected to the right way.

in German original with English subtitles


Written and Directed by Peter Fischli and David Weiss 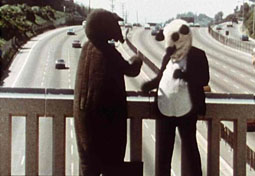