One need not look for new, as yet unseen images, but one must work with existing ones in such a way that they become new. (Harun Farocki, 1988)

This programme puts together three films from Harun Farocki’s extensive production during the last forty years, starting with a single channel version of a video installation from mid-nineties and going back to one of his first films, dated 1969. In spite of their formal differences they all represent forms of analytical methods, of film as a tool for researching image structures as well as the society in which they operate.

Schnittstelle/ Section (1995) [Interface]
During the last ten years Harun Farocki’s work has often been presented within the field of contemporary art using the structure of multiple screen installations. Thus this single channel version of the work can be seen as a form of documentation of the original work but also demonstrates the artist’s interest in reformulating existing material. The film serves as an introduction to Farocki’s practice, his view on film as thinking and his use of the archive image.

Bilder der Welt und Inschrift des Krieges (1988)
[Images of the World and the Inscription of War]
In 1944 the Americans photographed Auschwitz concentration camp during an aerial research for military reasons. Although the camp was clearly visible in the images, it was not seen since it was not looked for. In “Bilder der Welt“ Farocki investigates the ways we see and depict the world, and the structures by which visibility and meaning is restricted.

Nicht löschbares Feuer (1969)
Nicht löschbares Feuer [Inextinguishable Fire] deals with the use of napalm and the American chemical industry’s role in the Viet Nam war as well as the role of the individual/ artist in the modern mass production/ destruction society, indicated by the artist own appearance in the film. Clearly influenced by the agitprop movement and the political left of the sixties it point towards the connection between a radical view on the formal aspects and the subject of the film.


Harun Farocki, based in Berlin, was born 1944 in Nový Jičín (Neutitschein), in German-annexed Czechoslovakia. His work has been an important reference for other filmmakers and artists as well as for media theorists since the 1960s.


These films are a selection from the permanent Harun Farocki DVD library at Index in Stockholm. All films are presented with English subtitles or in English versions.
The programme, which will be introduced by Helena Holmberg, curator at Index, is one part of the Index – tranzit collaboration taking place in Prague and Stockholm during the first six months of 2007. 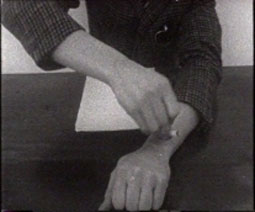