Presentation of some selected works of Swedish artist Jonas Dahlberg.

Jonas Dahlberg (b. 1970) studied art at the Fine Arts Academy in Malmo, architecture at Lund Technical University and art history at Gothenburg University. He has exhibited his video installations at numerous international exhibitions, such as Manifesta 4, Frankfurt 2002, the Venice Biennale 2003 and the Sao Paulo Biennale 2004.

His current focus of interest is architecture in a broader context, as well as space as such, reflections upon it, its possibilities and means of perception. He deftly articulates
this through language and film images.

Dahlberg’s video installations are presented and commented on by Jano Mančuška and Vít Havránek. 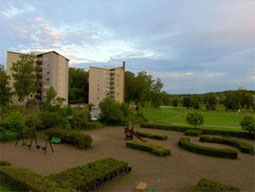