In cooperation with the artists and authors whom we publish we are preparing exhibitions, performances and other activities – tranzit.cz produces a series of multiples.

A multiple is an artwork created using technology that allows for a practically unlimited number of copies to be made that are all both originals and copies, i.e. they are works that avoid the original/copy polarity. Multiples are works of art that problematise and play with the concept of an artist’s aura. They may be produced in a limited or unlimited number of copies that are or are not numbered and signed. Nevertheless, each work is as valid as the other in terms of its artistic significance.

We do not view the problematic of the multiple simply as a game of numbers. We consider it mainly in connection with the history of artistic practice in the 20th and 21st centuries, when the expansion of industrial media and technologies incorporates within itself an interrogation of the new conditions of the production, distribution and status of the artwork as a commodity subject to market mechanisms. Discussion or rather the practice of the multiplied artwork is introduced via a host of historical examples, e.g. Marcel Duchamp, Piero Manzoni, Pop Artists, Joseph Beuys, Yoko Ono and Fluxus, Robert Filia, Lawrence Wiener, Ian Wilson, and Goran Trbuljak, and continues to the present time.

What interests us in this practical history and how we would like to contribute to it within the Czech context is the need to define the configuration of the idea and the means by which it is realised, form, economic value, attempts at democratisation and the social status of the artwork. This is because multiples still offer the potential for democratisation, desacralisation and greater social access to the outputs of artistic practice.

All the takings from the sale are used to produce the subsequent books, artwork, performance, etc.

tranzit.cz is offering a limited-edition multiples of work by Eva Koťátková, Lukáš Jasanský / Martin Polák and Jiří Valoch. Anyone purchasing one will receive a catalogue free of charge. 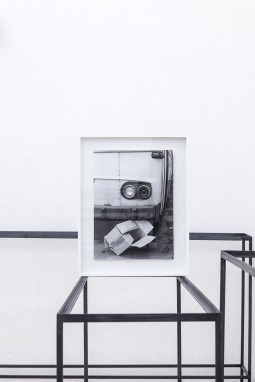