Talk sets out the conceptual framework underpinning the project of production, exhibition and diffusion of contemporary art and thought that was carried out at the Centro Cultural Montehermoso Kulturunea in the city of Vitoria-Gasteiz in the four years from 2008 to 2011.

This project incorporated women in all its programs and activities in parity for the first time in Spain, and considered feminist thought as a crucial source of knowledge for understanding contemporary artistic practices and the societies that produce them. In fact, Montehermoso was the result of taking up the principal critical contributions made by feminism in the field of contemporary art since women became massively and continuously involved in art practice and theory in the third wave of feminism, just forty years ago.


Xabier Arakistain is a feminist curator based in Bilbao. He incorporated the category of sex as a curatorial criterion since his first exhibition, Trans Sexual Express (Bilbao Arte, 1999).
Between 2001 and 2003 he introduced gender parity into the exhibition programme at Fundación Bilbao Arte Fundazioa, and from 2007 to 2011, he was Director of Centro Cultural Montehermoso Kulturunea, Vitoria-Gasteiz, making it a pioneering institution in the development and application of feminist policies in the fields of contemporary art, thought and culture.
Arakistain has also curated retrospective shows devoted to Feminist Art pioneer Judy Chicago, to the Guerrilla Girls (Whitechapel Gallery, London, 2016, FRAC Lorraine, Metz, 2016, Matadero, Madrid 2015, AlhóndigaBilbao 2013, as well as the shows Kiss Kiss Bang Bang, 86 steps in 45 Years of Art and Feminism (Museo de BBAA, Bilbao 2007), The Furious Gaze (co-curated with Maura Reilly), What I See. Susan Hiller (co-curated with Beatriz Herraez), or Kick in the Eye. Eight Feminist Strategies to Interrupt the Male Gaze.

In 2008, concerned about hurdles to the transmission of feminist knowledge between generations and the shortage of feminist texts in translation, he initiated, in collaboration with feminist anthropologist Lourdes Méndez, the yearly interdisciplinary, international and intergenerational course Artistic Production and the Feminist Theory of Art: New Debates. Since 2012, the course is held at Azkuna Zentroa, Bilbao, under the title Feminist Perspectives in Art Production and Theories of Art.


The lecture and seminar will be held in English.


---
The seminar is attended by a group of regular participants (artists, curators, critics from the Czech Republic and Slovakia) who are trying to find out a definition of a feminist institution that would be workable for them.

The goal of the seminar is to formulate a set of principles that we could follow and that could initiate further debate about sexism within art institutions in the Czech Republic/Slovakia and beyond. The seminars are about sharing and exchanging knowledge and experience.

The session lasts about one hour and half - two hours.

Applications for seminar by e-mail: office.cz@tranzit.org 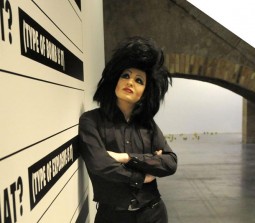