RealTime orients the life of every citizen. Eating, resting, going to work, getting married – every act is tied to RealTime. And every act leaves a trace of data – a footprint in the snow of noise...
(excerpt of Faceless)

In a society under the reformed Real-Time Calendar, without history nor future, everybody is faceless. A woman panics when she wakes up one day with a face. With the help of the Spectral Children she slowly finds out more about the lost power and history of the human face and begins the search for its future.

Faceless was produced under the rules of the 'Manifesto for CCTV Filmmakers'. The manifesto states, amongst other things, that additional cameras are not permitted at filming locations, as the omnipresent existing video surveillance (CCTV) is already in operation. 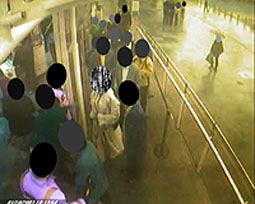