Salla Tykkä
Thriller
A young girl who lives in the grayness of autumn countryside is testing the boundaries of femininity and masculinity within herself. Sensuality yields as responsibility and empathy turn into a raw, aggressive act that shakes the edges of childhood.

Laso
Lasso exposes a moment in a young woman’s life; moment at which one’s inability to face the other - or oneself, even - is squeezed into a powerful sensation somewhere on the edge of the unreal.

Cave
The woman doesn’t succeed in her work. Her trowel fails to break the hard ground. The reality, where one must exist, is left behind as the woman’s path leads to the cave. Inside the cave in the darkness her hands sink in to the soft ground. The miners, who are able to work on the hard rock effortlessly, are frightening to the woman. She draws back, and hides in the darkness. She has to face a vast, blinding light before being able to enter the new scenery outside.

Mika Taanila
Futuro - A New Stance For Tomorrow
is a journey back in time to our recent futuristic past. It’s a documentary about the rise and fall of the plastic Futuro house, the story of a "Space Age" utopia that almost came true. Documentary turns the history of this forgotten milestone in Finnish design into a story full of international colour and drama. It traces the development of Suuronen’s "purely mathematical idea" into a multipurpose commodity which is eventually destroyed by time.

According to Eija-Liisa Ahtila what interest her in films and photos is above all the story. She calls her films “human dramas”. They deal, as do many of her other works, with human relationships, sexuality, the difficulty of communication, individual identity, its formation and disintegration. The stories Ahtila tells through her films and photos are based on research, on real and fictive events, on the experiences and memories of the artist herself, of those she knows, or of complete strangers 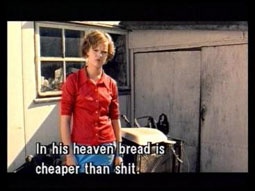