When one finds himself between the refusal and sort of micro-utopist escape and the potentiality to (re)act his position could be defined as a state of peripheral in-betweeness, to use the term coined by Stephan Totosy.

In the region, where after emergence of national states from one (Yugoslav) culture, while still being on the other side of the heavy doors of EU, the state of in-betweeness is manifested on many levels. One of the major preoccupations that occurs in such a position is to get its micro narratives somehow coined into the grand narratives of that other ‘real real’. In the last decade, a great number of art works in the region obviously derived from that shifting socio-political environment, dealing sometimes with extremely perplexed problematic. Artists started to question newly formulated ‘post-socialist moral majority’, position of the working class in the new, neo-liberal entrepreneurial age, ‘Wild East’ economic environment, new articulation of the role of the church etc. At the same time it was a decade of alternation of collective amnesia with glorification of some ‘other histories’ or some other parts of it’s own.

Today, these lands (named by the West as South East Europe- Balkan-West etc.) are left in is a sort of state of in-betweeness, keeping more or less powerlessly the peripheral position while at the same time trying to decipher which option of the triple cultural identity ( Central Europe, Balkan, Mediterranean) could be more convenient for ‘catching up’ with the ‘oh so mighty’ West.

In those scripted spaces where nostalgia meets great expectation, only the one that constantly asks questions will not stay trapped in the waitening room between the present and future.

The video works in this selection question some of these issues. 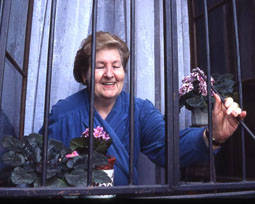