Silence, A Year from Monday, M, Empty Words and X (in this order) form the five parts of a series of books in which Cage tries, as he says, "to find a way of writing which comes from ideas, is not about them, but which produces them." Often these writings include mesostics and essays created by subjecting the work of other writers to chance procedures using the I Ching (what Cage called "writing through").
The author introduces the writings in this collection by explaining that they were written and presented in ways deliberately chosen to be non-traditional (as opposed to the traditional manner of a presenter reading his/her text from beginning to end following a linear structure of thought and idea). He writes that this approach was influenced by "Dada" and "Zen", commenting that the influence of both seems to have waned at the time of writing (the mid-20th Century).

The publication was supported by Ministery of Culture Czech Republic 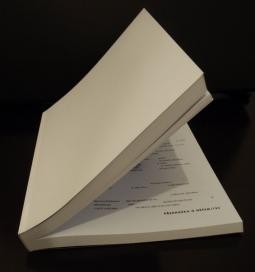