This catalogue is a record of the inventory of the work, reproductions, texts and projects of the conceptual artist Ján Mančuška (1972–2011) that began in 2012. The deadline for completion of the First Inventory was the exhibition organised by the Prague City Gallery in 2015.

The contents of the catalogue are arranged chronologically, as well as respecting the classification system that Mančuška himself used for his digital archive (works, sketches, texts, reproductions) and for the material constituents of his work (in his studio and gallery stock).

It includes Explications, i.e. short texts that reflect the artist’s attempt to track down the precise points of intersection between his literary and theoretical positions.

The section Texts is a selection of texts and essays by Mančuška examining the opinions, bases and references that both inspired him and that in several cases formed the material of his works.

Interviews, of which there are eight in this book, Mančuška regarded as a kind of public platform.

The mosaic of opinions is fleshed out by several exhibition Reviews. In hindsight we see how these offered Mančuška the opportunity to encounter sometimes somewhat outlying interpretations that subsequently incited him to formulate his own position more explicitly.

The selection of Theoretical Texts was guided by the desire to evoke the variety of discourses, activities and periods in which they were written.

Special Notes: The book was published with the support of the Ministry of Culture of the Czech Republic, Andrew Kreps Gallery, New York and Meyer Riegger Berlin/Karlsruhe.

Notes
This is the 11th volume of “tranzit series“, focusing on Central and Eastern European artists (edited by Vít Havránek, editorial coordination by Lionel Bovier). 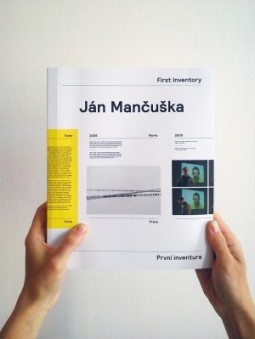