Absence is the third volume of the Tranzit series published in cooperation with Swiss publisher JRP-Ringier. The series focuses on significant figures of contemporary fine arts in Central and Eastern Europe.

The book presents a complete overview of the art projects completed from 2003 – 2007 of one of the most successful Czech artist of the young generation, Ján Mančuška (1971).

Since Mančuška, winner of the annual Jindřich Chalupecký prize, carried out these works in large exhibitions of contemporary art primarily outside the Czech Republic (Stedelijk Museum Amsterdam, Berlin Biennial, Basle Art Fair, Czechoslovak pavilion at the Venice Biennial) the book is an important source of information for Czech readers on the development of his work.

Absence is an artist’s book; it is not a dry document but rather plays with the function of a book itself. It is divided into two sections.The first, the textual section, arose in cooperation with theorist Vít Havránek, and in several essays the authors define the basic concepts and principles of Mančuška’s thought.The second part of the book maps Mančuška’s work through a series of photographs of installations, sketches, texts, and descriptions. The works of Ján Mančuška are of the nature of specific investigations. In them the artist deals primarily with ways of telling stories, with different speeds of time, or attempts to work with the perception of the viewer in the exhibition space.
Through three-dimensional objects, installations, performances, videos and film, he creates authentic thought models and maps of every day experience. He often works with text – language, which is isolated into the form of grandiose time-space installations. He is fascinated with plurality, simultaneity, non-linearity and fragmentation.

The book bears the skilful graphic work of Petr Babák and was awarded the third prize in the Most Beautiful Czech Book competition. 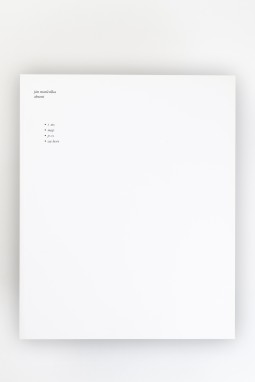