The newly created curatorial working group consists of Aziza Harmel, Rado Ištok, Renan Laru-an, Piotr Sikora and the tranzit.cz collective. Over the course of this year and the next, the group will be preparing the concept for the second edition of the biennale, which will take place in the summer of 2022 in Prague. The group was formed through an open selection process in which over 30 curators participated. The thematic foundation of the planned biennale builds on current discussions about the decolonization of art institutions with an aim to develop them within the Eastern European context. Curator selection was based on submitted proposals and interviews with participants. The four invited curators (Harmel, Ištok, Laru-an, Sikora) were chosen by representatives and board members of tranzit.cz.

Aziza Harmel (born 1985 in Tunis, Tunisia) is a curator and writer. She has worked at Documenta 14, Steirischer Herbst 2018, and elsewhere. In 2019 she co-curated a research program on curatorial knowledge, Qayyem, which migrated between Mass Alexandria (Alexandria, Egypt), MMAG Foundation (Amman, Jordan), and Atelier Kissaria (Tangier, Morocco). She also co-curated, together with Bonaventure Soh Bejeng Ndikung, Astrid Sokona Lepoultier, and Kwasi Ohene-Ayeh, the 12th edition of Bamako Encounters in Bamako, Mali – the only photographic and lens-based art biennale on the African continent. This exhibition, entitled Streams of Consciousness, served as an invitation to think about the artistic practice of photography outside of the tight corset of the photographic. Since January 2020 she has been a part of the curatorial team of Kunsthalle Wien. Her work revolves around ghostly matters, regimes of visibility, secrecy, and public secrecy. She lives and works in Vienna, Austria.

Rado Ištok (born 1989 in Veľký Krtíš, Slovakia) is a curator, writer, and editor. In 2018–2020 he was the curator of the European Cooperation Project 4Cs: From Conflict to Conviviality through Creativity and Culture at the Nida Art Colony of the Vilnius Academy of Arts, Lithuania, and he is the project leader of Spaces of Care, Disobedience and Desire (2018–2021), a discursive research platform in collaboration with Marie-Louise Richards and Natália Rebelo, supported by the artistic research funding of the Royal Institute of Art in Stockholm, Sweden. Recent exhibitions include Ala Younis: High Dam: Modern Pyramid (2020) at VIPER Gallery in Prague, Czech Republic; The Spectral Forest (2020) at Nida Art Colony, Lithuania; Dalibor Bača: Behind the Scenes (2020) at Modern Art Gallery in Hradec Králové, Czech Republic; Jacqueline Hoàng Nguyễn: Black Atlas (2019) at Július Koller Society in Bratislava, Slovakia; Liquid Horizons (2019) at tranzit.sk in Bratislava, Slovakia; Other Visions (2018) within the PAF - Festival of Film Animation in Olomouc, Czech Republic; and I’m fine, on my way home now (2017) at Allkonstrummet, Stockholm, Sweden. His editorial work includes the forthcoming exhibition catalogue The Spectral Forest (2021) and the e-publication Dwelling on the Threshold (Nida Art Colony, 2020). Together with Jacqueline Hoàng Nguyễn he co-edited the book Crating the World (Athénée Press, 2019), and with L’Internationale he co-edited the e-publication Decolonising Archives (L’Internationale Online, 2016). He lives and works in Stockholm, Sweden.

Renan Laru-an (born 1989 in Sultan Kudarat, Philippines) is a researcher. He is the Public Engagement and Artistic Formation Coordinator of the Philippine Contemporary Art Network. He studies “insufficient” and “subtracted” images and subjects at the juncture of development and integration projects through long-term inquiries, such as Promising Arrivals, Violent Departures, Marawi/Cotabato (ongoing), The Artist and the Social Dreamer, Forecast Festival, Haus der Kulturen der Welt, Berlin (2017), and Lightning Studies: Centre for the Translation of Constraints, Conflicts and Contaminations (CTCCCs), Hangar/Lopez Museum/TPAM, Barcelona/Manila/Yokohama (2016/2018), among others. He has (co-)curated festivals and exhibitions, including the 6th Singapore Biennale: Every Step in the Right Direction, Singapore (2019); Motions of this Kind, SOAS, London (2019); A Tripoli Agreement, Sharjah Art Foundation, Sharjah (2018); the 8th OK. Video – Indonesia Media Arts Festival, Jakarta (2017); and the 1st Lucban Assembly: PAMUMUHUNAN (Waiting for capital), Quezon Province (2015). His independent scholarship has been supported by the Foundation for Arts Initiatives, the National Commission for Culture and the Arts, and other curatorial fellowships. He edited Writing Presently (PCAN, 2019), an anthology of recent writing on contemporary art in the Philippines. Between 2012 and 2015 he directed the self-organized, multi-disciplinary platform and “virtual” organization DiscLab | Research and Criticism. He lives and works between Sultan Kudarat and Metro Manila, Philippines.

Piotr Sikora (born 1986 in Krakow, Poland) is a critic and curator of contemporary art. He defended his master's degree at the Institute of Art History of the Jagiellonian University in Krakow. He is a member of the Polish Section of the AICA. His curatorial career began with cooperation with the ArtBoom Festival in Krakow, Poland (2009-2015). He worked as the director of the ShowOFF section of the Krakow Photomonth Festival (2013-2015) and as curator for the visual arts program at the Małopolska Garden of Arts in Krakow (2013-2014). In his exhibition projects, he often refers to the issues of identity politics, stereotypes, and prejudices related to the region of Central Europe (the dubious geopolitical region stuck between the former East and the former West). He explores the connections between pop culture, politics, and the art world. His curatorial practice focuses on developing methods of deconstructing great narratives based on the concepts of irony, exaggeration, and provocation. The above-mentioned concepts were present in the exhibitions They don't know why, but they keep doing it (2011) at Waterside Contemporary in London, United Kingdom; Czech Pope (2014) at Meet Factory in Prague, Czech Republic; Slav Squatting and Its Discontents (2018) at Meet Factory in Prague, Czech Republic, and two shows curated as a duo with Łukasz Białkowski: Intermarium (2016) at Futura in Prague, Czech Republic, and Swag & Threat (2018) at Trafo in Szczecin, Poland. As curator of the MeetFactory AiR Program in Prague, together with Lucia Kvočáková he initiated the platform The New Dictionary of Old Ideas. He is also a lecturer at the Anglo-American University in Prague. Sikora is an ardent player of bike polo and father of a son, Bořivoj. He lives and works in Prague.

tranzit.cz is an initiative for contemporary art and a member of the tranzit.org network, founded in 2002 and working independently in Austria, the Czech Republic, Hungary, Slovakia, and Romania. Over the course of its existence, tranzit.cz has been engaged in numerous international projects and exhibitions within the framework of tranzit.org, such as Monument to Transformation 1989 – 2009; Manifesta 8, Murcia, Spain (2010); Report on the Construction of a Spaceship Module at New Museum, New York City, USA (2014); and others. From 2007 to 2017 tranzit was a part of the project of the tranzitdisplay gallery in Prague. In 2017 tranzit.cz initiated the code of practice of the Feminist (Art) Institution, and in 2018 it established the institution Biennale Matter of Art, which is a member of the East Europe Biennial Alliance (alongside OFF–Biennale Budapest, Hungary, Kyiv Biennial, Ukraine, and Biennale Warszawa, Poland). 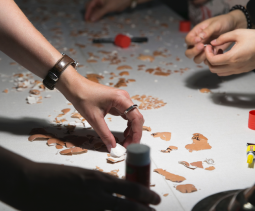