At the beginning of the year we chose the title 'Come Closer' for the first edition of the biennale, in order to address the contradictory nature of intimate relationships between humans and emphasise the link between art and empathy. Little did we know how much significance and unimagined connotations this title would take on within the context of the spread of the coronavirus into our lives. The overall zeitgeist surrounding the biennale has also shifted dramatically, and we view this situation as a great opportunity to formulate a new role that contemporary art serves within today’s social structure, which is, after all, a fundamental task facing every cultural institution these days.

The news arrives at a time when many cultural events are being cancelled or postponed until next year. The current events regarding the biennale represent a significant and positive example of a partnership of two seminal cultural organizations operating on the Czech art scene – tranzit and the Prague City Gallery (GHMP), where a major part of the exhibition entitled Come Closer will take place.

“GHMP has previously hosted a biennale focused on the up-and-coming generation of artists. The concept that the curators of tranzit.cz have developed is a far more ambitious one, reflecting the dynamics and shifts within today’s society, which are currently amplified due to the ongoing pandemic and its influence on our lives. The biennale will be our first exhibition after the lockdown, and its urgency has only increased since the initial phase,” comments Magdalena Juříková, director of the Prague City Gallery.

curator Tereza Stejskalová, draws attention to such themes as care, empathy, intimacy and identity of cultural minorities in relation to broader social, political and economic frameworks. The project builds upon the activities of the tranzit.cz initiative, which has had a significant influence on the Czech art scene since its foundation in 2002, but it also explores different perspectives in relation to feminist theory, a framework that Tereza Stejskalová has brought into tranzit.cz. She has been working for the initiative as curator since 2015, and was appointed programme director in 2019. Vít Havránek was the director of tranzit.cz from 2002 until 2019, when the producer and director Veronika Janatková took over the position. The Biennale Ve věci umění / Matter of Art is a member of the East European Biennale Alliance, together with the organisations OFF-Biennale in Budapest, Visual Culture Research Center in Kiev and Biennale Warszawa.

Further details on the programme will be published during the course of the following weeks. 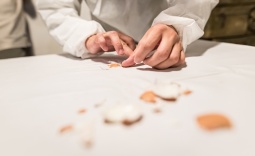