BOOK LAUNCH and pre-Christmas gathering - Carla Lonzi – Now You Can Go: A Dialogue with Pietro Consagra

Come and join the festive spirit with us by celebrating the publication of the first Czech translation (and the first translation of the book into a foreign language whatsoever) of Carla Lonzi's Now You Can Go.

This is a record of an actual four-day dialogue of between woman aged nearly fifty years old and a man on the threshold of sixty – a couple who have found themselves at a crossroads. The dialogue between the two people after fifteen years of living together is a testament to the poignant tension between art and life, love and career, but also devotion and a capitalist, patriarchal society. Pietro Consagra is an established Italian artist, Carla Lonzi rebellious intellectual, and an important figure in the feminist movement. Pietro needs to be indulged and supported in order to continue in his mission as an artist, which represents everything for him. Carla also has her own needs. She dreams of something she calls an authentic relationship, which will never be subordinated to any kind of mission. He longs for the space to create art and live like an artist – and he is unable to imagine his life otherwise. She wants to experience the relationship itself as a work of art – without a higher purpose. Neither of them wishes to capitulate. Eventually Carla tells Pietro: “Now you can go.”

Carla Lonzi (1931 – 1982) is considered one of the founders of Italian feminism, and her texts rank among the most important documents of this tradition. Originally an art critic by profession, she abandoned the world of art at the end of the 1960s and co-founded one of the first feminist collectives in Italy, Rivolta Femminile. Today she is known primarily as the author of provocative texts, above all the manifesto Sputiamo su Hegel (Let's Spit on Hegel) or La donna clitoridea e la donna vaginale (The Clitoridian Woman and the Vaginal Woman, 1971). In 1978 she published her diary, entitled Taci, anzi parla. Diaro di una femminista (Shut up, or Rather Speak. Diary of a Feminist), and in 1980 Now You Can Go. Her texts can be considered feminist experiments in the field of writing – they disrupt the boundary between the private and the public, between “high” and “low” culture, and depart in the direction toward marginal forms of written expression.

In the spirit of the tradition of Rivolta Femminile, whose members met regularly within a domestic environment, the book launch and pre-Christmas gathering will take place in a private flat. 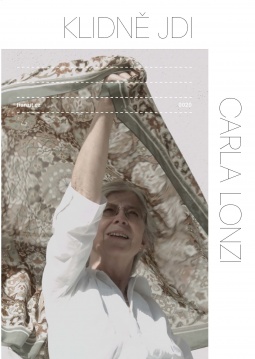