Ukraine: Art as a Response to Social Challenges

screening and presentation of project

The last decade of the political life in Ukraine is defined by revolutions. It has been the period of contradictory changes: the growth of protest activity and strengthening of the nationalistic discourse on one hand, and the development of feminist and LGBT movement, and civil society activities on the other hand. Currently Ukraine being dragged in war by the external aggressor from the Russian side is also going through the difficult period of internal struggle between different ideologies. Since the Orange revolution in 2004, art scene in the country became socially and politically engaged. During the recent years, after the Maidan revolution of 2013-2014 and because of the warfare, art has been actively reacting to traumatic experiences. Due to this social background, some of the issues, such as women’s, migrants’, and LGBT rights became much exacerbated.

Oksana Briukhovetska will contextualize feminist and gender topicalities in the art field and society in general, providing a comparative perspective on the current Ukrainian situation together with other post-Soviet and Eastern European countries. She will present feminist projects she curated last years.

Lesia Kulchynska will cover artistic strategies emerging in response to the challenges of social reality, and present her research on how violence and censorship intervene into the cultural sphere.


Oksana Briukhovetska
Artist, curator, publicist. She is a designer and curator of exhibitions at Visual Culture Research Center (Kyiv) since 2009. She curated exhibition projects Childhood Uncensored (2011), Ukrainian Body (2012), Lockout (2014), Motherhood (2015), What in Me Is Feminine? (2015), Textus. Embroidery, Textile, Feminism (2017). She works with the issues of feminism, gender, body, labor, and social exclusion.

Lesia Kulchynska
Curator, lecturer, researcher, publicist, PhD in Film Studies. She works at Visual Culture Research Center (Kyiv) since 2011. Among the curated projects: Ukrainian Body (2012), Unrendered Spaces (2011-2014), discussion platform Between Revolution and War (2014) , exhibition and research project Some Say You Can Find Happiness There (2015), The School of the Lonesome program of The School of Kyiv – Kyiv Biennial 2015 , performance and exhibition project The Raft CrimeA (2016) . She researches in image theory and film theory fields.

Oksana Briukhovetska and Lesia Kulchynska as a members of Visual Culture Research Centre are the participants of Institution in Residence program led by tranzit.cz 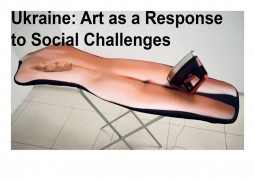