Dóra Maurer, Inter-Images. The connections between the painting and moving images.

Since the early 1970’s Dóra Maurer has investigated the relationship between space and movement through using serial sequences of images, geometrical structures, signs, and colors. Early on in her practice, she moved from experiments in printmaking to highly conceptual photography, structural film, and process-based drawing. Working in a wide range of mediums, she creates works based on rigid mathematical and conceptual processes guided by an empirical approach to conceptual problem-solving.

Apart from the geometrical systems and forms which are the basic elements of her compositions, she often used the human face and body to explore the dynamic balance between the static and the moving image as related to its representation.

In her presentation, Dóra Maurer will talk about some of the conceptual strings that connect different pieces from her oeuvre dating back to 1970’s in her experimental film practice and will explore the main motives and approaches that have defined her artistic consideration, regardless of medium and technique, over the past 4 decades
Dóra Maurer (1937, Budapest), one of the leading figures of the Hungarian neo-avant-garde generation since the early 1970’s, graduated in 1961 from the Painting and Graphic Faculties of the Hungarian Academy of Arts. Her experimental films and series of conceptual photographs have been recognized and lauded both at home and internationally. In addition to her artistic practice, she is deeply involved in pedagogical, organizational and curatorial activities: between 1975-77, she collaborated with Miklós Erdély as the leader of the informal study circle Creativity Practices at Ganz-Mávag, Budapest and she has been teaching at the Hungarian Academy of Arts since the 1990s. Her work can be seen in the most important exhibition venues all around the globe and is included in private and public collections such as MoMA NY, Tate and Centre Pompidou.

October 29th 19:00
Dóra Maurer, Inter-Images. The connections between the painting and moving images.

The language of the lecture is Hungarian (tbc), simultaneous translation into Czech will be provided.

This presentation is being held in conjunction with the exhibition Dóra Maurer: Parallel Systems, at hunt kastner gallery in Prague (opening October 30th at 6pm, until December 19th, 2015). Her experimental 16 mm film from the late 1980’s, entitled Inter-Images 1-3, which will be presented at her solo exhibition at hunt kastner, consists of three independent works exploiting the visual effects of the zoetrope, the interruption and the masking, she analyzes the nature of the process of visual perception. 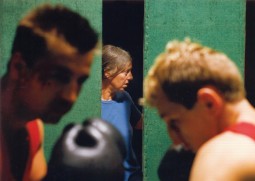