American composer John Cage (1912-1992) was one of the biggest names when it came to evolution of twentieth century music. His influence even spread into various other art forms (dance, theatre, poetry, visual arts, film), where his impulses were put to great use. The radical parting from the European music tradition and even from the up until then common understanding of art was characteristic for his works. After the initial experiments in finding new sounds, Jon Cage found himself in the early 1950’s maturing into a rather distinctive conception of music that strived to bridge the gap between Art and life. He emphasizes the role of focus in art perception and points out the fact that even silence is still full of sounds (which we usually fail to notice). In accordance with medieval mystic Master Eckhart’s teachings, Cage attempts to create the most candid composition for “everything that is to happen”. He used quite ingenious devices, including random choices from previously prepared possibilities. His opinions, summarized and published in Silence (1961), influenced the spiritual climate of the era and helped many other artists find new paths (different from their own).

Dr. Martin Erdmann (born 1960, Bottrop, Germany) studied at the University of Bonn (Science of Music, Chinese, Japanese) and dedicated his dissertation to the musical works of John Cage. Erdmann’s specialization is American music of the second half of the twentieth century (especially Jong Cage and Morton Feldman), he publishes in the edition Musik-Konzepte and in the Neue Zeitschrift für Musik, Musik und Bildung, Die Musikforschung a Musicworks magazines. He is also the author of the entry on John Cage in the Musik in Geschichte und Gegenwart Encyclopedia. Since 1993 he is active as an independent musicologist and pianist. He has also published studies on Robert Schumann and on the musical life during the Weimar Republic. Since 2001 he has prepared many radio programs about music and literature. Erdmann also cooperates with theatres as a director, author of scenic music and a pianist. During 2010 he lectured as a hosting professor at JAMU in Brno.

The evening will offer renditions of John Cage’s horals (1978), 4'33'' (1952) and Four6 (1992) played by the fama Q and Ronald Šebesta and Dr. Martin Erdmann (de) lecture with performative extracts from John Cage’s Silence (Variations VIII, Lecture on nothing…)

----------------------
Cage’s three compositions from different periods including the iconic 4'33''. Chorals inspired by Satie – not exactly the chorals you would be expecting; silence that can’t be kept quiet; time and sound born, passing and dying according to mysterious rules, according to hidden determinates, which however outwardly invoke an impression of circumstantialities.

Variations VIII (1967, rev. 1978) belongs to a group of indeterminist works, which the performers must ready themselves based on their potential. The composition is meant for “any number of musicians using instruments or devices located at the place of execution”.

The Lecture on nothing, written in 1949 and first published in Incontri musicali, in 1959, is a musically structured text, in which Cage sheds light upon his compositional method of that era based on rhythmical structure. The text is meant to be read out loud and is graphically structured into “measures” forming “segments” further creating “sections”. The micro- and macroform are established by the numeric structure 7, 6, 14, 14, 7, which is also transformed into the individual segments and the thematic contrasts between the sections. The form is in some places completed by mere repetition, elsewhere by silence, which lets you take in the surrounding sounds.

The event is supported by Geothe Institut Prag 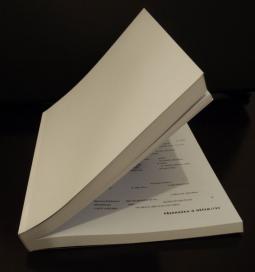