Biennale Matter of Art 2022 has come to a close in Prague, Katalin Erdődi and Aleksei Borisionok appointed curators for the 2024 edition

Both Erdődi and Borisionok are based in Vienna, Austria, and Matter of Art marks their first professional collaboration.

The biennale, which ended on October 23, focused on contemporary notions of decolonization in Central and Eastern Europe. Furthermore, it has brought attention to the topics of vulnerability, resilience, and trauma, both collective and individual.

Spanning three venues, the exhibition comprised works by 45 artists from Ukraine, the Philippines, Czechia, Romania, Sweden, and beyond. Eight new commissions co-produced by Matter of Art were created and exhibited for the first time. The public program comprised more than 80 events, including performances, debates, and workshops. Across three months, the activities organised in the framework of the biennial attracted more than 11 700 visitors. Reflecting the organizers’ commitment to making art publicly accessible, admission to the exhibition and accompanying events was free of charge.

On the occasion of the biennale, tranzit.cz published Soft Spots – a volume comprising theoretical texts and artistic interventions. The book remains available worldwide via Spector Books.

Robert Gabris and Luboš Kotlár created a site-specific installation for the art nouveau villa Šaloun Studio, which tackled the limits of collective efforts. The second largest venue of the biennale – a former laundry room of the General University Hospital in Prague – offered an expansive site-specific installation by Mandy El-Sayegh, created in collaboration with Lily Oakes and Alice Walter, which blurred the boundaries between the artwork and the space of the former hospital laundry. Elsewhere in the space, multimedia and video installations by Hera Büyüktaşcıyan, Bára Kleinhamplová, Anca Benera & Arnold Estefán, and Marie Tučková were on display. In the Prague City Gallery, the Laundry Collective, which consists of female artists who have previous or present experience with houselessness, set up a temporary workshop where the women would gather on a weekly basis to engage in lively discussions with visitors. A body of work by the late Alina Popa was presented across several rooms of the gallery, highlighting her unique artistic practice while stirring up a debate on the ethical, curatorial, and institutional aspects of the presentation of the works of prematurely deceased artists. The notion of fragility was explored in Tarek Lakhrissi’s collection of glass weapons and Hanni Kamaly’s abstract sculptures depicting traumatized bodies. The biennale sought ties between today’s condition and past traumas, notably through artworks by autodidactic painter OMARA – Mara Oláh, Roma Holocaust survivor and painter Ceija Stojka, or the German-Jewish artist Charlotte Salomon.

Aside from the three primary exhibition venues, the project expanded into various cultural spaces across the Czech capital, including the Center for Architecture and Metropolitan Planning, the interdisciplinary clubs Planeta Za and Bike Jesus, and beyond, adding up to a total sum of eight venues. Various workshops for children and adults took place at the Prague City Gallery while performances and debates tackled themes such as decolonization, artistic practice, and the war in Ukraine. Building upon a long-term partnership with the Kyiv Biennial, Matter of Art also presented a screening of Ukrainian video art created during the ongoing Russian invasion.

Based on the international open call for curators, tranzit.cz has selected and appointed Katalin Erdődi and Aleksei Borisionok as curators for the third edition of the biennale. Both Erdődi and Borisionok are based in Vienna, Austria, and Matter of Art marks their first professional collaboration. Over the course of the next two years, they will develop parallel curatorial projects which will culminate in the biennale exhibition. Tereza Stejskalová of tranzit.cz will be the artistic director of the project, citing access and inclusion as the primary focus of the organizing collective tranzit.cz. The Biennale Matter of Art will take place in the summer of 2024.


Biographies
Aleksei Borisionok is a curator, writer, and organizer. He is a member of the art research group Problem Collective and the Work Hard! Play Hard! working group. As a curator and writer, he focuses on art and politics in Eastern Europe during the socialist and postsocialist period. He has written and curated exhibitions and projects on education and unlearning, workers movements and strikes, the history of artistic practices, museum displays, and social movements in Kyiv, Minsk, Vilnius, Stockholm, Vienna, Poznań, and many other cities.

Katalin Erdődi is a curator, dramaturg, and writer based in Vienna and Budapest, who works with a focus on socially engaged art, experimental performative practices, and artistic interventions in rural and urban public spheres. As a curator, Erdődi has worked for art institutions and festivals such as steirischer herbst (Graz), brut (Vienna), GfZK (Leipzig), and Trafó (Budapest) and co-founded PLACCC Festival (Budapest), an international festival for site-specific performance and art in the public space. Her recent curatorial research focuses on critical rural art practices and investigates social change in rural areas through collaborative artistic and curatorial approaches, with a particular interest in the post-socialist transformations of Central and Eastern Europe, which she strives to address with decolonizing feminist methodologies. In 2020 Erdődi received the Igor Zabel Award Grant for her locally embedded and inclusive curatorial practice. 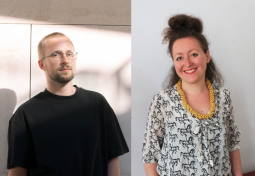