Who of us has never once contemplated the idea of escaping from society as we know it? Who hasn't ever thought about breaking out of everyday routine, the stereotype of the nuclear family, the social and economic regulations and laws we have to abide by, even though we have no genuine respect for them?

Could some other forms of social organisation represent a genuine alternative? Could experiments in a collective way of life based on different principles represent laboratories for the establishment of another type of human society? Could such experiments be sustainable in the long term? Why have they historically failed?


Communes – Utopia and practice is a three-day film festival featuring documentaries that illustrate and critically examine the experiences of people who in the 1960s and 70s abandoned their conventional social roles in order to spend a part of their lives in communes governed by different, alternative ideals.

Rena and Nadine were raised in a hippie commune from Tennessee and left in 1985. They are revisiting it now for the first time, to explore the commune’s and their own familiy’s history. After many years of hiding their past, they try to understand how did the biggest American utopian socialist experiment work, as they were part of it, too.

On Nov. 18, 1978, more than 900 members of Peoples Temple died in the largest mass suicide/murder in history. What drew so many people across racial and class lines to the Peoples Temple? How could a diverse group of 900 people be convinced to commit suicide? What was a California congregation doing in the jungles of Guyana? And who was Jim Jones to command such loyalty that parents would murder their own children? Using never before seen archival footage and survivor interviews, "Jonestown: The Life and Death of Peoples Temple" tells the story of the people who followed Jim Jones from Indiana, to California, and finally to the remote jungles of Guyana, South America, in a misbegotten quest to build an ideal society.

The wild 1970s. The search for new consciousness, spirituality and sexual liberation. In England, the young Hugh hears of spiritual teacher Bhagavan Shree Rajneesh from listening to a cassette. He travels to India on a journey in search of himself. The young Indian girl Sheela is being taken to the charismatic guru by her father and knows at the age of twenty-one that being with this man is everything she wants. In his ashram in Poona, Bhagwan has his disciples practice meditation and tantric sex to attain higher consciousness. Hugh witnesses the rise of the guru while serving as his bodyguard. Sheela becomes his personal secretary and the powerful boss of Bhagwan‘s model commune, which grows up in the mountains of Oregon during the 80s. It is here that five thousand young people attempt to create an ideal community by way of example to the world. The guru, who is derided in the Western press throughout the 70s as a „sex-guru“, makes headlines with his Rolls-Royces. The dream ends as a nightmare with Hugh suffering a spiritual breakdown and Sheela in prison. When did it all begin to go wrong?

The first hippie community was born long before the 60’s. A group o radical thinkers set up a commune on top of a Swiss mountain. The women burnt their corsets and men let their beards grow long. However, there were other many obstacles to overcome to make their little world work out.

In his highly personal search for his biological father, Austrian filmmaker Paul-Julien Robert reveals the true nature of life in one of Europe’s biggest communes, formerly located in the town of Friedrichshof, whose members espoused common property ownership, free love, and a markedly controversial method of raising children.

Set against the backdrop of its glorious 100-year history, Inventing Our Life: The Kibbutz Experiment reveals the heartbreak and hope of Israel's modern kibbutz movement as a new generation struggles to ensure its survival. Can a radically socialist institution survive a new capitalist reality? How will painful reforms affect those who still believe in the kibbutz experiment, and continue to call it home?

Through the lens of its communal movement, director Toby Perl Freilich explores the modern history of Israel, from its revolutionary settlers to the political upheaval that shook the socialist foundations of the state. We meet first, second and third generation members from kibbutzim like Degania, the flagship commune established in 1909; Hulda, once near collapse and recently privatized; and Sasa, the first to be settled entirely by Americans and today Israel's wealthiest kibbutz.

With their desire to create a Jewish homeland and build a more just society, the first settlers helped place kibbutzim in the vanguard of Israeli history. In doing so, they became a magnet for all those who shared one thing in common - a powerful urge to invent their own life.

In 1971, filmmaker Peter Robinson and a small crew entered a world of anarchic madness and healing compassion unlike any other. The resulting film, ASYLUM, records their seven week stay in radical psychiatrist R. D. Laing's controversial Archway Community -- a London row-house where the inmates literally run the asylum. Laing's conviction that schizophrenics can only heal their shattered "self" where they're free and yet are held responsible for their actions, challenged patients, doctors and, in ASYLUM's incredible document, the filmmakers, to live communally and peacefully.

In 1969, thirteen young mainlanders - refugees from campus riots, Vietnam War protests and police brutality -fled to Kauai. Before long this little tribe of men women and children were arrested and sentenced to ninety days of hard labour for having no money and no home. Island resident Howard Taylor, brother of actress Elizabeth, bailed out the group and invited them to camp on his vacant ocean front land. Howard than left them on their own, without any restrictions, regulations or supervision. Soon waves of hippies, surfers and troubled Vietnam vets found their way to this clothing-optional, pot-friendly tree house village at the end of the road on the island´s North Shore.

In 1977, the government condemned the village to make way for a State park. Within a few years the jungle reclaimed Taylor Camp, leaving little but memories of "the best days of our lives".

Taylor Camp reveals a community that created order without rules, rejecting materialism for the healing power of nature. We come to understand the significance Taylor Camp´s eight-year existence through interviews made 30-years later after film makers tracked down the campers, their neighbours and the government officials who finally got rid of them.


The entry is free. 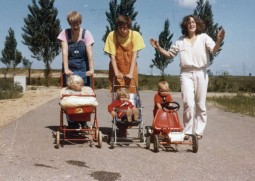