Avi Moghrabi: Avenge but One of My Two Eyes

Moghrabis latest film, Avenge but One of My Two Eyes, deepens into a politically charged reflection on suicide in Jewish myth and history. This documentary lets the tragic parallels between Jewish mythical heroes who kill themselves rather than surrender and Palestinian suicide bombers speak for themselves. Along the way, it questions the value of using history and myth to stir up nationalist fervour.

Avi Moghrabi (1956), is one of a few Israeli documentary filmmakers, who critically confronts with the myths and the believes of the Israeli society, especially in regard to the Israeli- Palestinian conflict.

Presented by Czechpoint Festival of Political Art
Curated and introduced by: Tamara Moyzes.

Screening will be accompanied with a brief introduction on Avi Moghrabi’s filmography. 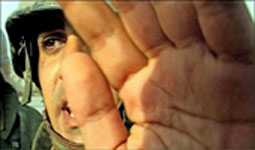