This publication searches for the place of Czech, Slovak, and Eastern European postwar art in global history. Programmatically avoiding the repetition of the processes of Western canonization, its aim is not to fruitlessly compare Eastern and Western neo-avant-gardes and contemporary art practices, but to decipher the circumstances under which artworks are created, theorized, and how they communicate with one another. Tomas Pospiszyl enlists the history of contemporary Eastern Europe art by highlighting emblematic stories of the art scene protagonists, and mixing personal anecdotes with artistic agendas.

Artists active in former Czechoslovakia (Knizak, Kolar, Koller, Kovanda) are considered in relation to Situationists, Minimalists, and Fluxus artists. Inter-generational connections are also drawn with Czech contemporary artists (Kotatkova, Mancuska, Seda). Establishing significant links through contrast and association, this collection of nine essays, spanning 1939 to 2013, proposes a new reading of the visual arts during the Iron Curtain Era and after. This approach enables different artistic or theoretical ideologies and interests to be related to the political and social situations of the West. Through deep analysis, it appears that even if the circumstances were very different, the results were sometimes astonishingly similar, as pointed out in Pospiszyl’s comment on the theories of Clement Greenberg and Jindrich Chalupecky: “Chalupecky and Greenberg are to a certain extent reminiscent of identical twins raised apart after birth whose mother—that is, their common intellectual background—was the interwar leftist avant-garde and the Marxist ideology that was undergoing a profound crisis in the late 1930s in both Czechoslovakia and the United States.”

Tomas Pospiszyl (*1967) is a Czech critic, curator, art historian, and teacher. He has published extensively on 20th- and 21st-century art, and coedited, with Laura Hoptman, "Primary Documents: A Sourcebook for Eastern and Central European Art Since the 1950s" (MIT Press, 2002). He teaches at the Film and Television School of the Academy of Performing Arts and the Academy of Fine Arts in Prague.

The volume is introduced by British art historian and art history professor Sven Spieker, founding editor of ARTMargins Print, a journal devoted to contemporary art practice in the global margins.

The book is part of the Documents series, co-published with JRP Ringnier, Les presses du réel and dedicated to critical writing. 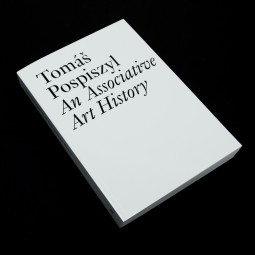