This anthology of theoretical studies and essays is the fourth volume in the series Post-Colonial Thought, which has a loose chronological order and contains both translations of whole books (Frantz Fanon – Black Skin, White Masks and Homi K. Bhabha – The Location of Culture) and two anthologies of selected texts. The present volume focuses on the subsequent period from the 1980s up to the present. In the course of this period, the post-colonial reflections of the male and female authors working mainly in Anglo-American universities cross the entire sphere of the humanities. These reflections bring a critical review of philosophical, historical, anthropological, literary, cultural and gender or otherwise prejudiced representations, identities and narratives/readings of history. The key to understanding the contemporary situation, not only in post-colonial countries, but also in the context of globalization, can be found in the various transformations of the concept of post-colonialism. The term itself is not, however, in any way homogenous and is and has been frequently problematized for its historical vagueness, lack of theoretical base and generally conceptual mutability. The point of the anthology is to offer the reader a plurality of approaches and critical viewpoints of the theoretical attitude that led to a change in the social science paradigm in the last thirty years.

Special Notes: The book was published with the support of the Ministry of Culture of the Czech Republic. 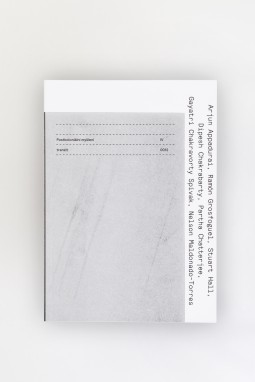