Pictorial Atlas of a Girl Who Cut a Library into Pieces. Institutional, Operational and Organisational Rules and Regulations 1961 - 1989

Recollection of the traumatic time of childhood. Stories and manifestations of spiritual otherness, Rituals and symbols of cultural alterity. Skeletons subject to the internal regulations of instituons, alienating fetishes, solidarity among animals, dreamwork, mirrors, truthful discourse.

Pictorial Atlas of a Girl Who Cut a Library into Pieces is a book that s not intended to be read and contains but few words.
The artist does not speak or use language. Instead, her discourse is like an autopsy of displaced and dicovered images.
She dissects the body and separates limbs that intersect with buildings or ´birds´wings. No whole is unified but all is held together simply by temporary and contradictory forces. The heterogeneity of the images is a sign of conflict between bodies and forms. A conflict between bare life and the norms of society and its disciplinary institutions.

The 267 collages by Eva Koťátková in this publication were created between 2013 and 2015 in parallel with the anthology of texts entitled Institutional, Operational and Organisational Rules and Regulations 1961 - 1989. The anthology includes the internal regulations of a children´s home, zoological garden, cemetery, hospital and post office, as well as many ordinances, such as the Ordinance on the Reporting of Persons Who Remain Abroad Illegally from 1970.


Eva Koťátková (*1982, Prague, ČSSR) studied at the Academy of
Fine Arts in Prague. She successfully defended her dissertation entitled the Parallel Worlds of the Outsiders: Forms of Manipulation with the Work and its Author (Academy of Arts, Architecture and Design in Prague (VŠUP), 2015). She has undertaken study trips at SFAI in San Francisco, ISCP in New York, the MuseumsQuartier in Vienna, and others. She won
the Jindřich Chalupecký Award (2007) and the Dorothea von Stetten Art Award (2014). Her large installations draw on many different media, including objects, archived photographs and documents, sculpture and
drawings. She has also written theatre plays, scripts, performances and texts.

In this publication, the primary motivations of her interest are childhood, spiritual and cultural otherness, the lives of animals, and manifestations of conduct and behaviour, which she then confronts with the norms of
disciplinary organisations.

Koťátková has participated at many joint exhibitions, including the 11th Biennale de Lyon, the 18th Sydney Biennale, the 55th Venice Biennale, and the 2015 Triennial at New Museum, New York, NY, USA. She has
had solo exhibitions at MIT List Visual Arts Center, Staatliche Kunsthalle Baden-Baden, Modern Art Oxford, Gallery of Contemporary Art / House of Art České Budějovice, and many other venues.

Notes
The publication is the 12th volume of the “tranzit series,” focusing on Central and Eastern European artists, edited by Vít Havránek.

Published in 2015 as a 2-volume set with Eva Koťátková: Pictorial Atlas of a Girl Who Cut a Library into Pieces; Institutional, Operational and Organisational Rules and Regulations 1961–1989


The book was made possible thanks to the kind support of hunt kastner, Prague, and Meyer Riegger, Berlin / Karlsruhe, which represent Eva Koťátková.

The book was published with the support of the Ministry of Culture of the Czech Republic. 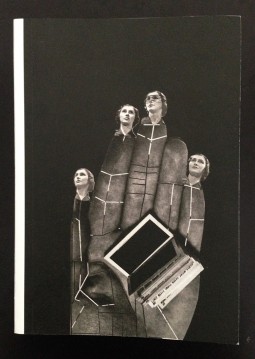