The War in Ukraine: A Feminist Perspective

Can feminism bring us fruitful perspectives based on which we can understand the war in Ukraine in ways that go beyond the hegemonic narratives circulating nowadays? What does feminism tell us about who bears the burden of resistance against Russian aggression? What can we learn from the point of view of weak and vulnerable subjects? What can we learn from the perspective of forgotten, “useless” histories?
Hosted by Eliška Koldová, the panel will include Olena Lyubchenko, Ewa Majewska, Oksana Dutchak, and Iryna Zahladko.

Olena Lyubchenko is a PhD candidate in political science at York University and an associate faculty member at the Brooklyn Institute for Social Research. Her teaching and research focuses on the primitive accumulation and financialization of social reproduction in post-Soviet Russia and Ukraine. She is an editor at LeftEast and Midnight Sun.

Ewa Majewska is a feminist philosopher and critical theorist of culture who focuses on weak resistance, counterpublics, and dialectics. She currently works at the SWPS Warsaw, conducting the project “The public against their will: The production of subjects in the archives of Hyacinth actions.” She recently published the book Feminist Antifascism: Counterpublics of the Common (Verso, 2021).

Oksana Dutchak holds a PhD in social sciences. She is co-editor of the journal Spilne/Commons and is currently continuing her academic work at the Berliner Institut für empirische Integrations- und Migrationsforschung. Her research interests include protests, workers, gender inequality, social reproduction, care work, Marxism, and Marxist feminism. Currently she is a refugee in Germany, with two kids and a dog.

Iryna Zahladko is a poet, translator, and performer. She has studied theoretical physics, organized a number of cultural events in Lviv, and won a number of Ukrainian literary awards. In 2018 she made her debut with the collection Lement i lehit. She moved to Prague in 2019.

The discussion will be streamed live on Wednesday, October 19, 2022, at 6 p.m. CET via Facebook and Zoom. The audience is welcome to participate in a Q&A following the debate.

The program is presented within the framework of the current edition of the Biennale Matter of Art. The biennale is currently taking place in two venues in Prague, Czech Republic, and it will conclude on October 23, 2022. The exhibition is accessible free of charge.

The Biennale is organised in the framework of the tranzit.cz project “Centre and Periphery: Cultural Deserts in Eastern Europe” supported by a grant from Iceland, Liechtenstein and Norway (EEA Grants) as a part of the programme Culture. The online discussion is funded by the Stabilisation Fund for Culture and Education 2022 of the German Federal Foreign Office and the Goethe-Institut. 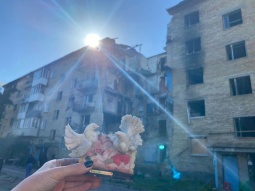