One of the fruits of the 1998 Reformation in Indonesia was freedom of the press and freedom of association/organization. Since the beginning of the Reformation (the early 2000s), various cultural organizations have emerged, and they have filled multiple aspects of the contemporary culture in Indonesia. However, not all of them can survive. There are some that still exist and continue to be a progressive collective in contemporary culture. One of them is Forum Lenteng. This organization was initiated as a shared learning space, which covers various aspects of contemporary culture, such as; media, art, film, and the world of activism.

By having existed for more than 15 years, some collectives have become significant players in Indonesian contemporary art, the Southeast Asian region, and globally. Through organic methods, these collectives find ways to survive, despite the lack of support from the state or large institutions in Indonesia. These groups carry out activities in various lines, not only in the areas of art and culture. They are included in various walks of life, which makes it play an essential role in society.

This presentation will describe the way Forum Lenteng has been established for 16 years as an organization engaged in alternative education, using art as its method.

Collective as Social Organism was inspired by the title of Hafiz Rancajale’s solo exhibition held in June 2018 – Social Organism – which tries to discuss art practice ideas created by Hafiz Rancajale and Otty Widasari after the Reformation in Indonesia, which were more dominated by works that facilitated art activities, through the organization they founded since 2003; Forum Lenteng.

The highlight of this presentation is how production in conducting facilitation work is discussed in the form of visual, audio visual and performance. The frame is always trying to see the current situation of society, the position of art in society, the development of history of modern and contemporary art in Indonesia, and how the process of knowledge exchange takes place in the mobilization of knowledge between art and society.

Curator, artist, and filmmaker. Lives and works in Jakarta. Co-founder of Forum Lenteng. He finished his education in Fine Art at Jakarta Institute of Arts in 1994. In 2013, he was Artistic Director for Jakarta Biennale SIASAT. Currently, he is the Artistic Director in ARKIPEL – Jakarta International Documentary and Experimental Film Festival.

Artist and writer. Co-founder of Forum Lenteng. She almost finished her study in Journalism, but instead, she completed her education in Fine Art at Jakarta Institute of Arts in 2013. Since 2018, she has been working as the Program Director of AKUMASSA, a community-based media empowerment and education, and chief editor for www.akumassa.org.

Residency program is supported by City of Prague, Ministry of Culture Czech Republic. 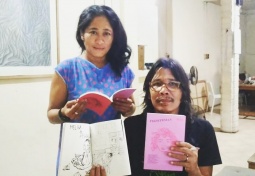