A talk given by Luis Camnitzer followed by a discussion

Luis Camnitzer (b. 1937) is an artist and acclaimed writer, curator and educator. He is Professor Emeritus at the State University of New York.
He studied in Montevideo, Uruguay, and left for the USA in 1964. He settled in New York, where he co-founded the politically engaged collective The New York Graphic Workshop (along with Liliana Porter and José Guillermo Castillo).

Having initially emigrated for work reasons, when the political situation in Uruguay led to dictatorship in 1973 he found himself in exile. This is reflected in the topics that feature in his work to date – identity and exile, otherness, resistance – while also situating political content within his writing and practice.

He was one of the organisers of Global Conceptualism: Points of Origin, 1950s-1980s, and is author of the books Conceptualism in Latin American Art: Didactics of Liberation and New Art of Cuba.
His work has been exhibited at many international exhibitions and biennales in Havana, Venice (where he represented Uruguay in 1988), Mercosur, Liverpool, Whitney and Pontevedra, and at Documenta 11.
A talk is organised in collaboration with the Academy of Fine Arts Prague.


A talk given by Luis Camnitzer followed by a discussion
Monday 2 November, 6pm 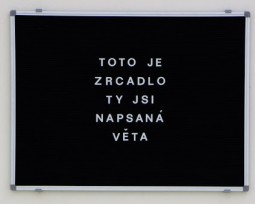