In Trinh T. Minh-ha’s first digital film, sound becomes the fourth dimension. Sound that defines the space we look at. This personal documentary is a reflection of the time the director spent in Japan. The fragmentary nature of the documentary, in which rerecorded and therefore inauthentic shots appear, examines a range of themes, among which travel occupies a special place. Japan comes across as a country fascinated by tradition, culture and social rituals. In a lyrical narrative style, Trinh T. Minh-ha shows how film prevents us from seeing and perceiving the world around us.

Tranzitdisplay invites you to a series of evening screenings – a film retrospective Trinh T. Minh-ha. On show will be films that couldn't be presented during her ongoing exhibiton due to time limitations.
„In her works Trinh T. Minh-ha balances between documentary and experimental film. Poetically-political stories speak about women, migrants, love, rituals and about transformation from traditional to modern society. Meanwhile Trinh T. Minh-ha concentrates on the film as such and discreetly disrupts its traditional qualities.“
Screenings will take place on January 7, 14, 21 and 28, starting at 7pm. 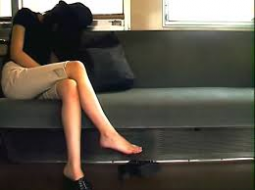