Tranzitdisplay invites you to a series of evening screenings – a film retrospective Trinh T. Minh-ha. On show will be films that couldn't be presented during her ongoing exhibiton due to time limitations.
„In her works Trinh T. Minh-ha balances between documentary and experimental film.

Poetically-political stories speak about women, migrants, love, rituals and about transformation from traditional to modern society. Meanwhile Trinh T. Minh-ha concentrates on the film as such and discreetly disrupts its traditional qualities.“

In this experimental documentary about life in six countries of West Africa, Trinh T. Minh-ha examines various forms and transformations of ritual. The linguistic collage and the director’s ability to overcome the barrier between the person filming and the person being filmed is not an exotic spectacle. In individual shots she comes into close proximity with the persons being introduced, resulting in intimate and therefore cultural differences going beyond portraits. As in her other films, in Naked Space the artist works with a vivid combination of the audio and visual, which somehow seem not quite to match up.

Everything is decentred and disturbed, and therefore open. Trinh T. Minh-ha shot the film in Mauritius, Mali, Burkina Faso, Togo, Benin and Senegal. 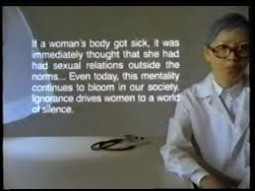