The Kids Want Communism. The 100 year anniversary of the Soviet Revolution.

Filmmakers of the world unite! Of exiled images and forgotten internationalism

These short films are abandoned images, like children conceived in the thoughtlessness of youth who don’t quite belong to anyone.

Nosratollah Karimi (1925), Nabil Maleh (1936-2016), and Piyasiri Gunaratna (1939), film directors from Iran, Syria, and Sri Lanka, shot them during their studies at FAMU, the Film and TV School of the Academy of Performing Arts in Prague, in the second half of the 1950s and the first half of the 1960s. Following their returns home, Karimi, Maleh, and Gunaratna played an important, if not crucial role in the development of Middle Eastern and Asian cinematography. Yet their student years are rarely mentioned. In Czechoslovakia, moreover, they left behind nothing of themselves, not a trace in Czech cultural memory... only these short films, witnesses to a forgotten time, unwanted and gathering dust in the archives.

The invisibility of these films is symptomatic of our times, our blindness to certain social and political contexts that remain unexplored to this day. This is the case of history of the relationship between cultural and political movements in Eastern Europe and emancipation struggles in Asia, Africa, and Latin America. Karimi, Maleh, and Gunaratna belonged to the thousands of students from the “Third World” who studied in the communist countries of the Eastern Bloc.

This form of support was a consequence of communist internationalism and solidarity with countries struggling with the heritage of colonialism, though it was also a matter of Cold War power struggle. Most students who opted for art studies dedicated themselves to film, as it seemed an efficient educational tool. At the end of the 1950s, FAMU witnessed the birth of a film avant-garde, the Czechoslovak New Wave, and Prague became home to the cultural renaissance that culminated in the Prague Spring.

The films of Karimi, Maleh, and Gunaratna are images of internationalism, of cultural exchange, and of the role Czechoslovak art played in the cultural emancipation of countries with colonial pasts. These films pose never before asked questions about the influence these temporary residents had on Czechoslovak culture and politics.

Their participation at this exhibition returns these short films to the Middle East and Asia, thus following their directors, with a delay of over half a century. They belong to their directors’ home countries and they don’t, as at the same time they both belong and don’t belong to Central Europe.

The Kids Want Communism is a joint project of numerous individuals and organizations, which hosts its exhibitions, screenings, discussions, seminars and publications in a variety of locations; among them Tranzit, Prague, Free/Slow University of Warsaw, State of Concept, Athens, Škuc gallery, Ljubljana, Visual Culture Research Center, Kyiv, Westspace Melbourne, and MoBY: Museums of Bat Yam.

The part of the exhibition called "Filmmakers of the world unite! Of exiled images and forgotten internationalism" is curated by Tereza Stejskalová.


The exhibition is held as a part of the project Kids Want Communism, curator Joshua Simon, MoBY-Museums of Bat Yam, Israel.


The project Filmmakers of the world unite! Of exiled images and forgotten internationalism is realized in cooperation with the National Film Archive Prague (www.nfa.cz), Film and TV School of Academy of Performing Arts in Prague (www.famu.cz) and MoBY-Museums of Bat Yam (moby.org.il). 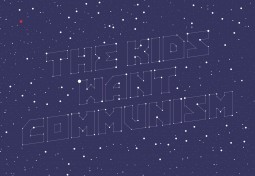