Ján Mančuška. Me, the Double, and the Other.

Me, the Double, and the Other is the first overview of the work of Ján Mančuška in Canada. Curator Vít Havránek places emphasis on works that are contemplating borderline postures of subject towards its own mirror image, double identity and memory.


Ján Mančuška appeared on the art scene in Czech Republic in the late 1990s. His work is distantly related to the Czechoslovak vernacular version of Conceptualism of the 1960s and 1970s (Stano Filko, Jiří Kovanda, Jiří Kolář and others).

As its international reception progressed, Mančuškaʼs work came to be characterized by two clearly differentiated but constantly interconnecting thrusts.
On the one hand, he developed the post-conceptual tradition of actively questioning language signification in the process of the construction of narrative (the languages of literature, video, performance, and film).
On the other hand, his interest grew in recounting often existential, true (“ready-made”) stories. They remotely resonate with an important moment of social-political history, known as the Velvet Revolution or the Fall of the Berlin Wall, in 1989, which shaped Mančuška’s generation. The complex exchange between these two continuums—the artificiality of language and the oppressiveness of the narrated true story—might be regarded as the most specific and powerful aspect of Mančuškaʼs work.

Mančuška himself conceived exhibitions as installation, as well as performative events. This exhibition is not a simulation of the artist’s approach to the locally specific event. Rather, it places emphasis on works that are contemplating borderline postures of subject towards its own mirror image, double identity and memory. It also includes parallel lines of drawings, studies and period materials, offering an excursion into a “post-studio” work practice of the artist.

This exhibition is the first overview of the work of Ján Mančuška in Canada.

To the left, in the main space of VOX, the visitor sees Ján Mančuška’s video Double (2009). In a semi-documentary arrangement, one man stands before the video projection of another man. Both figures perform the same monologue, but the viewer only hears one voice (that of the second man, on the screen). It recounts a mysterious tale about the mirrored duplication of a space; about a house, the doors to that house, and the doors to an apartment in Bratislava, into which fits a key intended for a similar-looking house and apartment in another city (Prague).

The entirely mirrored duplication of known reality in another, strange city depicted in the installation Double has the ghostlike nature of which Derrida speaks in the introductory quotation. The duplicated image is convincing enough to dupe the human senses completely, even as reason tells us it is impossible. Fully believing in the true existence of a duplicated reality is possible only in dreams. If someone were to dream such a story—and each person would perhaps dream it a little differently—then no dreamer would doubt its truthfulness.

The narrative of Double, however, ends with another duplication: the main narrator finds himself confronting his double. But the double is not his mirror image, and does not even look like him. The story thus ends in fear. Where else but in a dream or in a film could one meet one’s phantom—one’s double? The double winds up on the threshold of a split-personality state, where the ghost is as real as the reality, a condition some psychiatrists link with schizophrenia.

The story of the works of Ján Mančuška may begin where the story of the Double ends. The action of Double has been described here as though it took place outside time. However, it was filmed in 2009, when the artist (who was born to Slovak parents in Bratislava and who has lived most of his life in Prague, in the Czech lands) was 37 years old. The cities that are spoken of in Double were of crucial importance to the author—they reminded him of the “ambivalence” of his nationality. In the Czech lands he claimed allegiance to his Slovak origins (among other things, writing his name the Slovak way with the accent over the á: Ján) so that he could distance himself from them in Slovakia. After 1992, when the Czech-Slovak federation was divided into two independent states, the narrative of one’s Slovak origins in Czech lands acquired a new ideological dimension.2 An individual can, thanks to origins in a different country, escape being shut into the static identity of the country in which he lives. In Mančuška’s case, as in many others, it was certainly not just a simple affirmation of the national origin of the country from which he came, but of an uncertain in-between life; a life lived between two firm shores of identity.

Let us return to the hero of the moment, who is gazing into the eyes of his double. Post-Communist schizophrenia, like capitalist schizophrenia, is a theme that has been addressed by Ilya Kabakov, Boris Buden, Félix Guattari and other artists and writers. Schizophrenics describe states during which they can hear “two or more voices in opposition.” The moment that shaped Mančuška’s generation came with the political changes of 1989, known variously as the Velvet Revolution or the Fall of the Berlin Wall.3 That double title is more than symptomatic. Members of that generation, born in the 1970s in the Socialist bloc, considered authoritative Socialism to be somewhat unsatisfying but natural, because they had experienced neither the “Socialism with a human face” of the 1960s, nor Western capitalism. Consequently authoritarian Socialism was replaced by a version of neo-liberal capitalism imported from the West. Intoxication with capitalist pleasures did not last long. A question that had been pushed out returned: What had happened to the will of the active crowd of citizens that had overthrown the authoritarian regime? And what had happened to love? Was the love between two people under Socialism—the opposite of capitalist love—thus a false love? (The same could also be asked with respect to other moral and social values.) And if not, where does the dividing line run between the old and the new order? It runs across the subject, and it causes schizophrenia, because it speaks with two voices at the same time.

One must also recall, in relation to this, Mančuška’s works Big Mirror (Velké zrcadlo, 2008) and The Other (2007). Big Mirror consists of a large mirror, unaltered in any way, fixed to the wall of the gallery. The mirror does not duplicate reality, but creates on its surface an image that appears to the human eye to be a duplication of reality.4 The Other is a photographic record of a performance during which a clothed woman darkens parts of a male friend’s naked body that he cannot see. The Other and Big Mirror are works in which mirroring is found in opposition. The dark parts on the model’s body show those parts that the individual cannot see, but at the same time they create the identity of his “I”, which others see. Here we may recall Melanie Klein: to Lacan’s interpretation of the “mirror stage,” she adds that it is not so much a mirror that we require to recognize ourselves but, above all, “the other.” It is only in contact with an other that we recognize the completely specific possibility of our own body; it is only someone else who can clarify for us whether the double to whom we opened the door with our own key is our own image, or a complete stranger.

Vít Havránek
---
1. Exchange between Pascale Ogier and Jacques Derrida in the film Ghost Dance (West Germany / UK, 1983, dir. Ken McMullen).
2. When Mančuška was born, the two independent states currently known as the Czech Republic and Slovakia were one federal state, the Czechoslovak Socialist Republic. It was divided in 1992.
3. The lack of terminological clarity—Is this a revolution or a fall?; I.e., an emancipatory act by massed citizens, or a passive threat to a construction which can no longer withstand the rules of the market economy?—is in itself already a sign of two diametrically different versions.
4. Lacan, in his major early essay about the mirror, attributes the paranoid nature of knowledge to the ontological structure of the human world itself. The paranoid essence of knowledge emerges best when observing a small child who recognizes him- or herself in the mirror.

Biography
---
Ján Mančuška (1972–2011) was born in Bratislava and later moved with his parents to Prague. He studied at the Academy of Fine Arts in Prague. A visual artist, filmmaker, critical spirit and avid writer, he took part in many group exhibitions, including at the Stedelijk Museum in Amsterdam, Manifesta 4 in Frankfurt, the Berlin Biennale 4, and MoMA in New York.
He held solo exhibitions at Andrew Kreps Gallery in New York, Kunsthalle Basel, the Czechoslovak Pavilion at the Venice Biennale, Meyer Riegger in Karlsruhe, tranzitdisplay in Prague, Kunstverein Braunschweig and others.
His work has recently been the subject four museum retrospectives in Central Europe (Prague, Bratislava, Brno, Łódź). Works by Ján Mančuška are in major museum and private collections worldwide, including those of MoMA, the Centre Pompidou in Paris, TBA 21 in Vienna, City Gallery Prague, Muzeum Sztuki in Łódź, and Kontakt, Art Collection Erste Group.

The exhibition is presented with support from the Ministry of Culture of the Czech Republic, as well as the kind collaboration of tranzit.cz, Ján Mančuška Estate, Andrew Kreps Gallery (New York) and Meyer Riegger (Karlsruhe/Berlin), in addition to the collections of Caroline Schmidt, Jill
Kraus and Peter Kraus (New York). 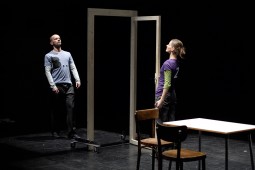 External Links
Ján Mančuška. Me, the Double, and the Other.