Cinema in the Head

Film is present in various forms in Tomáš Svoboda’s work. He uses the language and environment of film in such a way that we notice them at once. He makes no attempt to conceal the fact that props are props. The action is narrated by media other than film. Movement in film is confronted with movement in the space of the viewer. The principles of film montage are reduced to the most graphic examples. The procedures of film production and the conventions associated with consuming the resulting products are exposed by Svoboda to various deviations from the norm.
Svoboda takes from cinematographic works that which film achieves by film and prepares and presents it outside itself, most often in the form of spatial installation, gallery projections, or works resembling the procedures of conceptual literature. The film structure is taken apart and film mechanisms are extracted from their natural environment and made more visible, perhaps even more vulnerable: we stop trusting them and start to understand them. Svoboda separates out the individual layers of the creation of filmic significance in order to create his own meanings. The exhibition at the tranzitdisplay gallery is a kind of retrospective of similar “filmic specimens” by Svoboda. Viewing them is the prelude to a new synthesis. Svoboda is completing a feature film in which the reality of film and the reality of life are interwoven within the framework of a cinematographic work bound to the environment of the cinema. However, even in this he attempts to show that film in the last instance only comes together in our heads.


Tomáš Svoboda is one of the most interesting artists of his generation. He was co-founder of the Display Gallery and was recently appointed a lecturer at the Academy of Fine Arts, where he heads the New Media Studio.

Over recent years he has been involved in film narrative and its relationship to the way we conceive of reality in everyday speech. Tranzitdisplay is the co-producer of his new, ambitious film project, in which he offers a synthesis of the conceptual thinking he has been pursuing for many years. 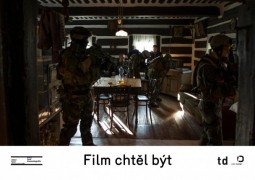