Jiří Valoch (b.1946) was one of the main representatives of the international Visual Poetry movement at the end of the 1960s. Over three decades he created a remarkable number of texts intended to be both read and looked at.

The exhibition Merde is the outcome of two years of “archaeological” work in the apartment at Jugoslávská 46a in Brno. This is where Jiří Valoch – conceptual artist, curator, theoretician and art collector – has lived since he was a child. The sediments of his activities in all of these roles, which he has been storing here for more than fifty years, have turned the apartment into a unique site. The objects and documents have not been arranged in any particular order. Valoch has prioritised other activities over (self) archiving. Instead, he very kindly donated the materials to the Moravian Gallery in Brno, which is also processing them.

This also applies to his artistic activities, which form the subject of this exhibition. From the fragments discovered in various different places, a basic catalogue is gradually being created. It uses the same terminology and categories that Valoch the theoretician applied to the work of Valoch
the artist.

The exhibition takes the form of a practical taxonomy of the material that has been found and identified up till now. However, the constellation on show comprises a basic panorama of Valoch’s systematic exploration of and fascination with work with text. On a metaphorical level we can conclude that Valoch lives more inside the text than he
does in his own apartment. The title of the exhibition refers not only to a word repeatedly used by Valoch, but is also in harmony with the subversive potential of his work.

On the occasion of the exhibition tranzit.cz has published a volume of poetry by Jiří Valoch entitled White Sheets (1964–1968) and an edition of the multiple photo-event Enunciation of the Word Junk from 1970.
White Sheets Jiří Valoch originally compiled his manuscript White Sheets (Bílé listy) for publication by the Brno publishing house Blok in 1968. The book was included in the publishing plan, laid out and supplied with four Minimalist illustrations by Dalibor Chatrný. According to Valoch, the book was meant to have a square format of roughly 20 x 20 centimetres in size. The publication of the book was halted, however, by the invasion of Czechoslovakia in August 1968 and the subsequent period of “normalization” that impacted in the late 60s and early 70s on the work and staffing of the publisher's editorial office.

The exhibition is being curated by Ondřej Chrobák and Jana Písaříková. 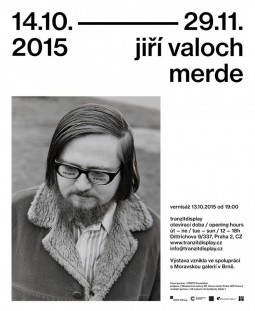