In 2014, the Sculpture Studio of UMPRUM founded a collection of items using which it is involved in an ongoing attempt to track the boundaries of sculpture as a medium, the contours of an item, sculpture and object, their psychology, materiality, historicity, institutionalisation, as well as the dynamic of a studio community. Items for inclusion in the collection are selected by a committee of students and lecturers who interpret the item prior to accepting or rejecting it. We take note of the entire process involved in the creation of the collection and record not only the items themselves, but the oral and textual flow of thoughts that surround them. We are convinced that a collection without interpretation makes no sense, and so we decided to validate the collection and the activities associated with it on a regular basis by means of a series of episodic exhibitions and other presentations.

The project entitled “Episode III – The Collection and Health” does not work with the studio collection but is derived from the ideas surrounding it. In relation to the contemporary perception of an object in art and society, we are interested in the item or thing as an object of desire. This desire for an object can be interpreted in many different ways, from a Lacanian psychological to a materialist and realist standpoint. The desire for an object can easily lead to the level of deviation, and yet also forms the basis of a market economy, an aspect of the way that partnerships and sexual and marital alliances are formed, the basis for the study of civilisation, or one of the impulses for the creation of sculpture or art in general. The collection of anything involves a considerable degree of concentration and can develop into an obsession. The collection therefore has a healthy and unhealthy aspect and this project operates on the interface of this relationship. However, we do not emphasise the phenomenon of collecting from a psychoanalytic viewpoint underpinned by the libido, but track the theme of collected items and health from the point of view of their materiality and their ethical and social function.

At the same time we want other problematic spheres in today’s changing relationship of the subject to the object to come to the fore, namely the phenomenon of exhibiting, which accentuates the manipulative energy of the subject and the passive role of the object. We are exhibiting the items in the project “Episode III – The Collection and Health” according to three themes: “The Collection and Health – the national aspect”, “The Collection and Health – the moral aspect” and “The Collection and Health – the sickness of the object”. These individual themes will be realised in the form of a public discussion involving representatives of the collection and invited guests, and the method by which the items are exhibited will ensue from this debate, sketched out in detail and then implemented over the days to come. The exhibition has three developmental phases in the form of events that will always begin at 6pm with a discussion on 15, 21 and 28 April 2015. The exhibition will come into being during the course of its own duration. Each event will draw several other collections into the project. Individual events will be updated on an ongoing basis. 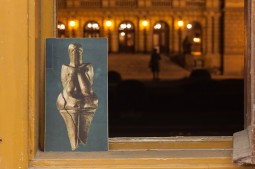