The Encyclopedia of Failure

Part of the Jakarta Biennale 2013 SIASAT

The installation brings together an experimentally installed group exhibition and an official document. The works of Nina Beier and Marie Lund, Cezary Bodzianowski, Barbora Kleinhamplová, Eva Koťátková, Jiří Kovanda, Juan Pablo Macías, Boris Ondreička, Neša Paripovič, Mladen Stilinovič, Fiona Tan, Pia Wergius and Lawrence Weiner stand on their own. There is a document, a 10-point "Declaration on promotion of world peace and cooperation", which was proclaimed during the first Asian - African Conference (held in Bandung, Indonesia, in 1955).
The juxtaposition of the exhibition and the text visualizes various regimes and cases of failure in reading: failure in reading oppressive or liberating symbolism, failure in associating chained words and moving images, failure in grasping the meaning of historical attitudes, failure caused by the particularization of self-interests, failure by oppressive conformity, failure by sweet innocence and fear of aggression, failure by simplification and de-contextualization 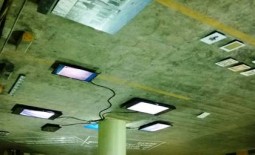