The selected fragments in this exhibition, borrowed from the archives of Moravian, Slovak, and Hungarian artists, reference different communities within the framework of 1970s and '80s unofficial culture.

The installation is found in two locations, at the Brno House of Arts and at tranzitdisplay in Prague. The common conception found in these two spaces develops an exhibition project of the same name realized at trazit dielne Bratislava in the summer of 2012.

The current exhibition presents the second outcome of the research and artistic intentions of Barbora Klímová, Daniel Grúň and Filip Cenek. Each of them are concerned with private archives and have a history of communicating and cooperating with artists of the given generation to varying degrees in their regional environments (Brno/Morava – Bratislava). They focus, primarily, on manifestations bordering on art (traditionally defined works, authorship, originality) and creative, spontaneous events or leisure activities; creative activities which lead to an intense experience of the moment.

The subjective, artistic-curatorial approach to the exhibitions, based on associative linking of how the documents communicate with each other from the contemporary perspective of the authors of the exhibition project, suppress an objectifying view of history, art, the artifact, and the artist's status. The conceptual layout of the exhibition is laced with the potential of incorporating individual archives within the spatial framework of the exhibition. Combining two locations for a single exhibition, making it necessary to visit both location for completion, can be understood as emulating the circumstances that defined the events that are traced.
The majority of these events took place outside of the city center, on the outskirts, in the countryside - requiring participants to invest a certain amount of energy in common travel and residence.

The publication, which brings together both parts of the exhibition, is an integral part of the project and includes a map and extensive captions. 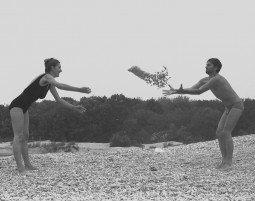