Studio Бања Лука (pronounced Banja Luka) was created as a spontanneous grouping of a broader circle of people from the Faculty of Fine Arts in Brno and of external participants.

As a working team of artists and theoreticians, they set as their main goal the examination of possible models of collective work.

Since the initiation for the studio's creation was an appeal made by two young Bosnian artists to organize an "exhibition" in Banja Luka, the largest city in Serbia, the horizon for the activities became the intended work residency in Bosnia, during which the functioning of the proposed models were to be verified.

The specific rendering of jointly prepared scenarios revealed a complicated structure of supposedly democratic principles of production and introduced new elements into the group's dynamics - such as the suppression of individual identity and its unexpected emergence, discipline and the breaching of rules, met and unmet expectations, the ideal of doing away with a hierarchy contrasting with the emergence of new social structures, etc.


At tranzitdisplay in Prague, Studio Бања Лука is attempting a spatial synthesis of this experience, including both specific post-production of jointly created material and a decoding of its relationship to "invisible" aspects of the studio's operation, to the crossing of group and individual factors in the creation process, but also to bystander (though not “uninvolved”) experiences, emotions and recollections.

The therapeutic mode of the “system constellation”, whose “raw material of content” consisted of all the mentioned aspects of the studio’s collective activities, was chosen to be analysed and arranged and was adapted to the necessities for presenting them in a gallery.

With regard to the studio method of ongoing seminars and events, the form of a gradual layering that materialise in the gallery space before and during the exhibition was chosen for a gallery installation. 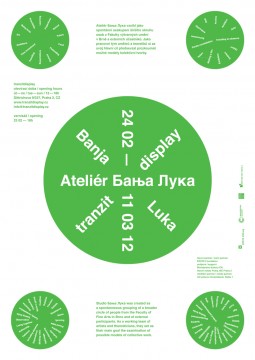