Three-months hosting of the Archive in TD

The mobile archive of the Israeli Centre of Digital Media in Holon will be located at transitdisplay for three months.

The archive contains a unique collection or 1,200 art films, records of performances, documents and audio-visual testimony originally from countries of the Middle East and partially even from Europe.

The video footage amassed over the past twenty years reflects most of the geopolitical and social changes and tension in the region. It does not lay any claims to being the most complete archive, but in its scope and variety it creates a kind of comprehensive picture and reflection of the complicated conflicts and coexistence of Jews and Arabs against the backdrop of national, religious and historical relations.

For two years now the archive has been travelling and stopping at various museum and art institutions around the world. Each stop allows for different methodological approaches and generates different themes. The way the films are selected opens a broad field for discussions of the human fate experienced in a global neural node that Israel and Palestine undoubtedly is.

---
The Mobile Archive
A Project of The Israeli Center for Digital Art, Holon

The Mobile Archive, initiated in 2007, is a sister project of the video archive at the Israeli Center for Digital Art in Holon, Israel. The archive is presented as a video library in a gallery space with viewing stations, at which visitors can watch chosen artworks. At the end of the exhibition, Tranzitdisplay is invited to add twenty-five works to the archive. So far, the archive has traveled to Hamburg, Sao Paulo, Basel, Zagreb, Milan, New York and many other international locations.

The Mobile Archive primarily consists of videos by Israeli artists such as Yael Bartana, Dor Guez, Public Movement and Avi Mugrabi . In addition, the international institutions that have hosted the archive have contributed works, including those by Artur Zmijewski (Poland), Adrian Paci (Albania), Yoshua Okon (Mexico), Christian Jankowski (Germany), Shilpa Gupta (India), and Daniel Bozhkov (Bulgaria), which have been contributed by the international institutions that hosted the archive.

The Israeli Center for Digital Art is a dynamic platform for thinking, researching, producing, presenting, and analyzing contemporary art, as well as providing a meeting point for exchange between contemporary artists, curators, critics and the public.

The center is a non-profit organization supported by the city of Holon. As a public art space it consistently questions the place of art institutions within their society. This brings to the front political and social issues. In an effort to stimulate discourse in Israeli society, the center devotes a significant part of its work on art projects that foster questions about identity, ethnicity, nationalism and cultural Exchange

During its three-month stop at tranzitdisplay, the archive will be accessible to all to choose videos and conduct research.


To provide a faster and more in-depth orientation, we've invited curators and experts who will prepare their own choice of videos accompanied by a lecture.

Among those invited are Miloš Vojtěchovský, Vít Klusák, Milena Bartlová, Tereza Spencerová and Tamara Moyzes. The programme will be changed every 14 days; the previous selections by curators will be available and can be viewed in the archive. The specific details of the programme will be set at the end of February. 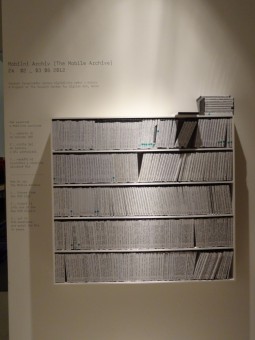