IPUT
International Parallel Union of Telecommunication
(Trustee in bankruptcy: Tamás St. Turba)
SUBSISTENCE LEVEL STANDARD PROJECT 1984 W
or
This is what became of the unicellars


St. Auby began his artistic career with its end. Already in 1966 the non-art artist wrote his last poem and bade the muse farewell. Since then, he has created an extensive oeuvre made up of actions, happenings, poems, compositions, sculptures, thoughts and mail art, known internationally mainly to the happy few. But St. Auby is not elitist at all and deems himself a neo-social realist.


In the history of Hungarian art, St. Auby holds a key position. This is partly due to his not easily consumed but very influential art or non-art and partly to his essential role in disseminating happenings and Fluxus throughout Hungary.

The exhibition was realized in cooperation of tranzit.hu

With the support of the National Cultural Fund of Hungary. 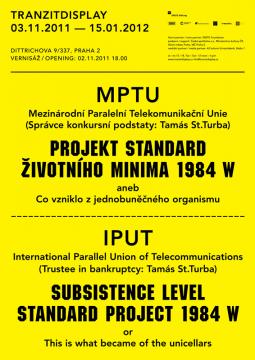