I (Ich) I Performative Ontology is the third part or “act” in a series of exhibitions taking place in Bratislava (I Narrow Focus, June 29—August 14, 2005, tranzit), Prague (I Já, May 3—June 20, 2006, Futura Gallery) and Vienna, with a somewhat different constellation of artists in each, while its core, or perhaps the thematic sphere it contains, remains the same.

In philosophy, ontology is defined in connection with the idea of conceptualization: “A conceptualization is an abstract, simplified view of the world that we wish to represent for some purpose.” (T.R. Gruber, A Translation Approach to Portable Ontology Specifications, 1993).

However, instead of aiming to define the concept in philosophical terms, the exhibition is about what this definition of ontology cannot capture because it concerns a matrix that changes over time. Ontology exists only in particular lives, in individuals, in the ‘I’ in concrete time. Ontology interests us not as a verbal or theoretical dimension in the existence of the individual, but rather as a performative, temporal dimension. Which is why we speak of performative ontology.

Some of the works will be visible during one act alone, others during two acts, and others during the course of the entire exhibition. Those works temporarily not on show, however, will not be removed, but merely concealed behind a curtain or switched off. Viewers are called on to imagine the missing artworks (on the basis of the title and media) and to visit the exhibition multiple times.

The works shown at the Secession deal with temporality, the relation between subjective and general knowledge, between intimacy and publicness.
Some are records of important life situations, others are analytical observations of social structures. 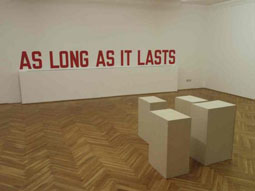 Related
I
I - Narrow Focus