Jiří Skála has put up a newly ordered photograph of the Labour Union house on billboards in front of large shopping centers. The initial incentive behind this work was the „conflict between my ideal public space and the real public space that is offered to me“.
The billboard visually initiates communication with the employee, employer and shopper beyond the control of some companies that try to dissuade its employees in various ways from joining unions.
The project also evokes a dialog between the photographed functionalist architecture of the Labour Union house from 1932 – 1934 and the architectural ideology of shopping centers. 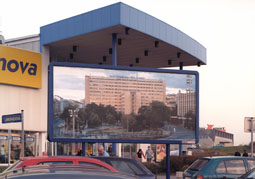