Otty Widasari
Otty Widasari (b. 1973, Balikpapan) is a painter, video artist, writer, filmmaker, curator, and media activist. She was educated in Journalism at Jakarta Institute of Social and Political Science (IISIP), then completed her Bachelor degree at Faculty of Art, Jakarta Institute of Art (IKJ) in 2013. She is one of the founders of Forum Lenteng, an egalitarian nonprofit organization that focuses on media, cinema and arts, which is based in Jakarta. In the organization, since 2008 until now, Otty is the Director of Community-Based Media Education and Empowerment Program, or so-called AKUMASSA. Through the program, Otty is very active in organizing workshops and projects related to media and art, in collaboration with local communities in several cities in Indonesia. Between 1998 and 1999, Otty worked as a journalist for a daily newspaper and a weekly tabloid, then in 2000-2002, he worked in a private television station as an artistic director. Otty was involved in many film and video-making projects. In 2008, he was involved in the 9808, a short film compilation project, as one of the filmmakers, along with several other prominent filmmakers. Then in 2011, Otty was also involved in the creation of a documentary entitled Dongeng Rangkas (2011) as Production Manager.
Her famous films and video works include Punk Satu Minute (2005), Horor Satu Minute (2005), Rumah (2007), Rumah 2 (2007), Kemarin (2008), Interior Kaca (2008), Naga Yang Berjalan Di Atas Air (2012), and Jabal Hadroh, Jabal Al Jannah (2013). Otty became one of Indonesia Art Award finalists in 2008. Her works and art projects have also been frequently presented at various art events or film festivals, both for national and international scale, among others in OK. VIDEO Militia - 3rd Jakarta International Video Festival, Jakarta (2007); 5th Singapore Film Festival, Singapore (2009); 11th Barcelona Asian Film Festival, Spain (2009); International Film Festival Rotterdam, Netherlands (2009); Translated SPACE, ID Contemporary Art of Indonesia, Kunstraum Krausberg, Berlin (2010); OK. VIDEO Flesh - 5th International Jakarta Video Festival, Jakarta (2011); 4th DMZ International Documentary Film Festival, South Korea (2012); Jakarta Biennale - SIASAT, Jakarta (2013); Biennale Jogja XII Equator # 2, Yogyakarta (2013); SeMA Biennale Mediacity Seoul, South Korea (2014); Bienal de la Imagen en Movimiento Buenos Aires, Argentina (2014); Impakt Festival, Utrecht, The Netherlands (2014); Experimenta - 9th International Festival of Moving Image Art, Bangalore, India (2015); Images Festival, Toronto, Canada (2015); and L'Age d'Or Festival, Brussels, Belgium (2016). In 2014, Otty was invited to participate in an artist-in-residence program in Utrecht by Impakt. One year later, she was also invited to participate in an artist-in-residence program in Singapore by NTU Center For Contemporary Art Singapore. In 2015, Otty Widasari's solo exhibition, Ones Who Looked at the Presence, was held in Ark Galerie, Yogyakarta. Then in 2016, the second solo exhibition, Ones Who Are Being Controlled is held at Dia.Lo.Gue Artspace, Jakarta. Both solo exhibitions are part of Otty's ongoing projects in the framework of her research on the colonial film archives that she started since doing her residency project in the Netherlands. Otty is also the main curator of the AKUMASSA Chronicle art project initiated by Forum Lenteng. In 2016, the first AKUMASSA Chronicle was held in the District of Pemenang, North Lombok, West Nusa Tenggara, on the cooperation of Forum Lenteng, Pasirputih Foundation, and community as well as stakeholders in the district. In Jakarta Biennale 2017, Otty presents her video performance and also her live performance. Her video performance titled “Video Performance: Ones Who Looked at The Presence” is collected by KADIST Foundation.

the event will be held in English
free entrance


Hanif Alghifary
Hanif Alghifary (b. 1993, Jakarta) is member of Forum Lenteng. He is a student of Institute of Social and Political Sciences, Jakarta. He is a part of Kampung Segart Community, a university community that concerns on street art. He is also one of the founder of Visual Jalanan. Visual Jalanan is one of the platforms in Forum Lenteng that focuses on street art and all kinds of visuals that are produced and distributed on the street. With his fellow artist in Visual Jalanan, he conducted an exhibition titled “Bebas Tapi Sopan”, a fringe event of Jakarta Biennale 2015. He joined an artist collective Klub Karya Bulu Tangkis, and with this collective, he joined several group exhibitions: OK VIDEO Festival Orde Baru in 2015 and Visual Jalanan Bebas Tapi Sopan in 2015 titled “Penjaskes”, and ARTE Indonesian Art Festival in 2014 titled “Petualangan Nasi Uduk”. He also did a residency titled “Kaleidoskop” in Jogjakarta as a fringe event of Jogjakarta Biennale 2015. He also joined Palugada Compagnie, a workshop on Multimedia Performance in 2015.

Prashasti Wilujeng Putri
Prashasti Putri (b. 1991, Jakarta) was graduated from Criminology Department, Universitas Indonesia. During her study in Universitas Indonesia, she joined a traditional dance community in the faculty, named Radha Sarisha. Being active in that community, she was involved as a dancer. In 2011 and 2012, along with her fellow dancers, she went to Spain, France, and Belgium to join Festival Du Sud. She joined Forum Lenteng since 2014 in a project called “Halaman papua: Media for Healthy Papua” as a researcher. She conducted research with her three other researchers in Timika, Sentani, and Jayapura about how media shall improve public health service. She is also one of the managerial team and the coordinator of Festival Forum of ARKIPEL – Jakarta International Documentary and Experimental Film Festival. She joined 69 Performance Club on April 2016. Since then, she is active in the 69 Performance Club as an artist and manager. Her works “Crossing” was her first performance art piece which was taken place in ruangrupa Gallery on April 2016. Her other works “Light as A Gift”, “Body Blowing”, “Misogyny”, “Taman Bermain Samba”, “The Complexity of Adulthood” were done in several places in Jakarta. Her on-going performance project now is her study on Francis Bacon, titled “Triptych Stories” that she does it through social media: Instagram Story.

Ragil Dwi Putra
Ragil Dwi Putra (b. 1992, Salatiga) is a member of Forum Lenteng, graduated from Jakarta Art Institute majoring Fine Art, specifically graphic art. She joined “Bentara Muda”, a group exhibition in Bentara Budaya Jakarta in 2012. He also joined other group exhibitions, such as “Pasar” in Galeri Soemardja, Bandung, in 2013; “Namanya Juga Anak Muda” in Survive Garage, Jogjakarta, in 2013; “Jakarta 32° Festival” in Museum Fatahillah, Jakarta in 2014, “Tebet di balik Tebet” in ruangrupa Gallery, Jakarta, in 2015; “Undisclosed Territory #10” in Studio Plesungan, Solo, in 2016; and “Bongkar Muat” in Gudang Sarinah Ekosistem, Jakarta, in 2016. Her performance works can be watched in www.69performance.club such as “Self Portrait”, “Pace Maker”, “Light Clamp”, “Rectangle Inside Rectangle”, “By The Mirror”, “Menjadi Beberapa Bagian”, “Small Field and Table”, “Glance in The Mirror”, and “Transfer Image”, that he did in 2016-2017. 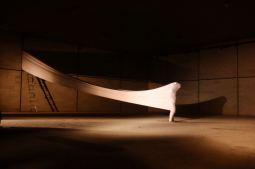