Edouard Chiline: Soviet Russia in the 1920s - 1930s and the Roma Renaissance

Vast changes affecting the majority of Russian Roma took place in the wake of the 1917 Russian revolution. Regrettably, however, most Gypsiologists and others commenting on that period limit their attentions to the founding of the Romani theatre (1930) and the translation of some political brochures and pamphlets into Romani language. Is that so? Should we be more gentle and precise in looking back?

Today, in the time of Facebook and Instagram we can criticize things that were happening in the past. But for the traveling minorities who were roaming the earth for centuries and never had a source of history past it was an incredible event. Unfortunately, due to the way of life, eternal struggle for survival and in many cases a misperception of written knowledge, Romani people lacked the literary past which could help to cement the nation. In this case as Jewish people were always saying – “Never forget”, the core of Romani existence was – “Never remember”.

Let’s step back to the history of NEP. The so called New Economic Policy implemented in 1921 reintroduced an element of capitalism. The Soviet state maintained control of major concerns such as heavy industry, banking and transport, while the free market flourished lower down the scale. Private enterprise – restaurants, shops, small-scale manufacturing and even the transfer of some larger enterprises to private hands was back. Peasants were allowed to work their farms again provided they did so within the communal system and restricted their labour force to family members. Taxation replaced the produce quota system and the state retained ownership of the land.

As one of the main government concerns was the immense illiteracy of the population, the Soviet government launched a literacy campaign and set about reorganizing the school system. Education was free of charge but subjected to the Communist ideology. It combined book-learning with physical labour.

It’s sound bizarre today but under the communist government non-Russian nationalities and other minorities were authorized to set up their own schools in which teaching had to conform to official policies. The doctrine was one of fusing communism with national cultures with the unexpected effect of sparking a renaissance in the latter. From 1925, when Soviet control was felt to be securely established, the country enjoyed a brief period during which minorities were encouraged and supported in developing their distinctive cultures.
On the 20th February 1928, the newspaper Izvestia published a decree issued by VTZIK, the All Union Central Committee to all Roma residing in the Russian Federation, recommending that they change their lifestyle from nomadism to sedentarism. It is also placed all authorities under obligation to provide Roma with land on which to establish agricultural cooperatives.

What is the most interesting in the context of my report is that due to the revolution, emphasis on promoting intercultural action in general and specifically, Romani education, the “Romengro lav” (Romani word) literary group came into being in 1929. Its members included Ivan Rom-Lebedev, M. Polyakova, N. Duadorova, K. Alekseeva, A. Polyakov, G. Lebedev and many others. The group’s objective was “to strengthen the language and to create a Romani literature”.

The arts, music and theatre experienced a great resurgence and artists enjoyed enormous creative freedom. The first great event in the Romany arts was the 1931 debut of the play “Yesterday and Today” in the world’s first Romani theatre “Romen” in the Soviet capital.
The Romen theatre is the only survivor of the glorious Romani renaissance and Soviet efforts to promote Romani language and learning. Following the fall of communism and the dissolution of the Soviet Union, Russian Romani intellectuals from various groups have endeavored to set up Romani schools but given the current state of the Russian economy and the authorities’ lack of interest these efforts have not been particularly successful.

Lecture will be held in English and will be translated to Czech
Free entrance
Event is in the cooperation of tranzit.cz
FB event here

Edouard Chiline comes from the Romani community of Nizhny Novgorod, Russia. He was born in 1968 and studied theatre history and film management at the Moscow Art Theatre School. His main work so far has been on issues of film, culture and media. He is the creator and publisher of Rombiblio, the biggest online source of Romani language literature, available at www.rombiblio.ru. Further projects relate to the political economy of international film festival, trans-national cinema and pan-European cinematic migrations. Edouard Chiline has published widely in a variety of film and media journals. His research has been funded by the Soros Foundation and the Next Page Foundation. 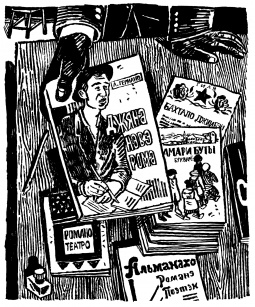