Lecture by Kamil Kandalaft, a Palestinian Slovak human rights activist and blogger, on the situation of Palestinian citizens of Israel followed by a discussion.


During the foundation of Israel in 1948, Palestinians suffered the so-called Nakba – a series of massacres which lead to a mass expulsion of more than half of the Palestinian population out of their country. Some managed to stay in the territory occupied by Israel and later they became its citizens.

“Palestinian citizens of Israel are part of the Palestinian nation. Although they do not live under such an oppressive regime as Palestinians in the occupied territories, they also experience discrimination, racism, and violence.
For 68 years they have experienced expulsion, destruction of their villages, military law, confiscation of property, repeated massacres and killings, and even today they are exposed to everyday discrimination in the system of education, employment, housing, and town or village development. Until now a huge part of them has faced threats that their homes or villages will be destroyed.
Despite this, Palestinian citizens of Israel are presented by Israel's supporters as the proof of Israel's democracy. These people are present in their country, but not as equal citizens. And they are absent from the awareness of the world,” says Kamil Kandalaft.


The lecture will be in Slovak


The evening is part of a series of events dedicated to Palestinian Nakba (15 May) and Land Day (30 March). The British documentary film Enduring Roots about the ongoing colonization of Palestinian territory and the role of Jewish National Fund has been screened already as part of this series. In mid-May there will be a screening of Al Jazeera's documentary Al Nakba.


The event is organized by the Czech group of International Solidarity Movement (ism-czech.org) together with Tranzitdisplay, and the Slovak Initiative for a Just Peace in the Middle East (ismbv.sk). 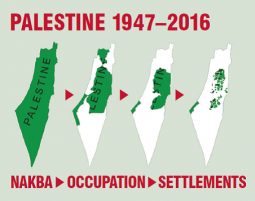