With Tina Kukielski, independent curator and co-curator of the 2013 Carnegie International at the Carnegie Museum of Art

What is the smallest thing a museum can do? And what is the biggest one? Established in 1896 by Pittsburgh industrialist Andrew Carnegie, the Carnegie International is the oldest exhibition of international contemporary art in North America and one of the few that take place in a museum. Join Tina Kukielski in a conversation about what a museum looks like in the 21st century.

Tina Kukielski was co-curator, together with Daniel Baumann and Dan Byers, of the 2013 Carnegie International, in addition to serving as curator of the Hillman Photography Initiative. She recently curated the exhibition Cory Arcangel: Masters (November 3, 2012–January 27,
2013), a focused survey of the artist’s works since 2002. She was formerly a senior curatorial assistant at the Whitney Museum of American Art in New York where she co-organized the
museum’s contemporary project series from 2007 to 2011 with such artists as Sadie Benning, Corin Hewitt, Omer Fast, Taryn Simon, and Sara VanDerBeek. While at the Whitney, she also
curated a number of group exhibitions of photography including A Few Frames: Photography and the Contact Sheet (2009), Resistance Is… (2007), and The New City: Sub/urbia in Recent Photography (2005).

Her publications include essays in exhibition catalogues for *William Eggleston: Democratic Camera, Photography and Video, 1958–2008*(2008), Taryn Simon: An American Index of the Hidden and Unfamiliar (2008), and Gordon Matta-Clark: You Are the Measure (2007), among
others. She is also a recent contributor to Mousse and The Exhibitionist.

Tina Kukielski’s lecture and research stay in Prague is supported by the US Embassy in Prague.

Tranzitdisplay and Curators & Critics Program
Tina Kukielski: What Art in the Museum Looks Like (The Carnegie International and the Museum of the Future)
Thursday October 9, 2014, at 7PM

Tina Kukielski’s lecture and research stay in Prague is supported by the US Embassy in Prague. 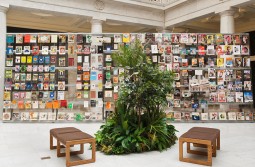